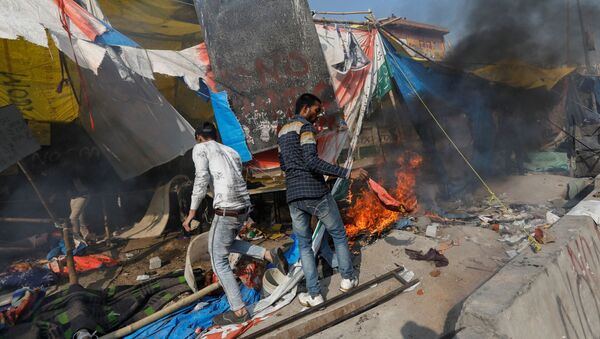 New Delhi (Sputnik): Home to about 20 million people of different religious faiths, Delhi underwent State Assembly Polls on 8 February, giving the Aam Aadmi Party a landslide third term. But as the US President visited the city, where anti-Citizenship law protests have been ongoing for two months, violence of an unprecedented scale erupted.

Several parts of India's national capital have witnessed riots and communal tensions least expected by residents of this otherwise peaceful city in decades.

Similar violence took place in the city in the 1984 anti-Sikh riots that followed the assassination of then Prime Minister Indira Gandhi by her two Sikh bodyguards. The violence had claimed 2,733 lives across the country, according to government estimates.

On Sunday evening 23 February, tensions gripped several areas of the northeast side of Delhi, as clashes erupted between anti and pro Citizenship protesters. Reports of rioting, property damage and arson started emerging from areas such as Jaffrabad, Maujpur, and Chandbagh.

According to police, over a dozen vehicles were set ablaze, property was damaged, and traffic was severely affected. This caused police to use tear gas shells to disperse agitated demonstrators and resort to baton-charging to prevent the situation from worsening.

However, the violence didn't end and protesters, most of them youngsters, started pelting stones at the police. Soon, the Pro and anti-citizenship law protesters blamed each other for initiating the hurling of stones and general violence.

On Monday 24 February, as many as five people including a policeman died while over 100 people were injured after being hit by stones pelted by agitated demonstrators, or after being caught in the firing in some parts of the city.

Violent protesters damaged a lot of property including setting some police and private vehicles on fire, and even a petrol station was up in flames. Miscreants also damaged some religious sites. The agitated protestors also targetted many reporters in the field, some of them were manhandled for recording the violence.

The Delhi Police had to impose Section 144 CrPC (to prohibit the assembly of five or more persons when unrest is anticipated) in 10 locations in northeast Delhi. The officials of the Delhi Metro closed the entrances and exits at Jaffrabad and Maujpur-Babarpur metro stations because of the situation.

However, despite massive security deployments, law and order in the national capital went for a toss.

On Tuesday morning 25 February, chants of 'Allah Hoo Akbar' (Praise of Allah) and 'Jai Shree Ram' (Praise of Lord Rama) were being made by protestors. Soon, the clashes that were being staged over the controversial citizenship law (CAA) turned into Hindu versus Muslims clashes.

While the rest of the Delhi remained peaceful all these days, the affected parts of northeast Delhi turned into a communal battlefield between Hindus and Muslims by Tuesday night.

The areas near the Maujpur and Jaffrabad Metro Stations witnessed heavy stone-pelting, the use of petrol bombs and bullets were fired irregularly at rival groups. Equipped with iron roads and wooden sticks, the groups let out war cries in the presence of police.

Despite police trying to control the situation by carrying out flag marches and using tear gas, a lot of people including youngsters in both the rival groups were armed with sticks, batons, pistols, iron spatulas, steel chains, baseball bats, heavy metal objects and petrol bombs.

On Tuesday, after the situation got out of hand, Union Home Minister Amit Shah called a meeting, and later in the day Ajit Doval, the National Security Advisor to Prime Minister Narendra Modi, began monitoring the situation.

Police officials swung into action and cleared the mob on both sides and pacified the crowd.

Sources in the police confirmed that shoot on sight orders along with curfews in sensitive places were issued to maintain law and order.

Officials late on Tuesday night revealed that as many as 18 people had died due to the violence and over 170 were injured.

On Wednesday, some students surrounded Delhi State Chief Arvind Kejriwal's house and demanded he take action over the violence.

Even an Intelligence Bureau Official's body was recovered from the riot-hit Chand Bagh area. Police said he was killed during the riots.

The sensitive areas of the national capital saw extra paramilitary forces deployed in the area and no violence was reported from those parts of the city. Most people came out of their houses after two days.

"The situation is totally under control. People are satisfied. I have confidence in law enforcement agencies. Police forces are doing their work," said Ajit Doval who visited the affected areas once again on Wednesday, assured the affected and terrorised residents of the riot-hit areas of their security.

Until Wednesday, the Delhi Police had registered 18 First Information Reports, and 106 people were arrested in connection with the incidents in northeast Delhi. Miscreants are being identified. We have CCTV footage and reliable evidence.