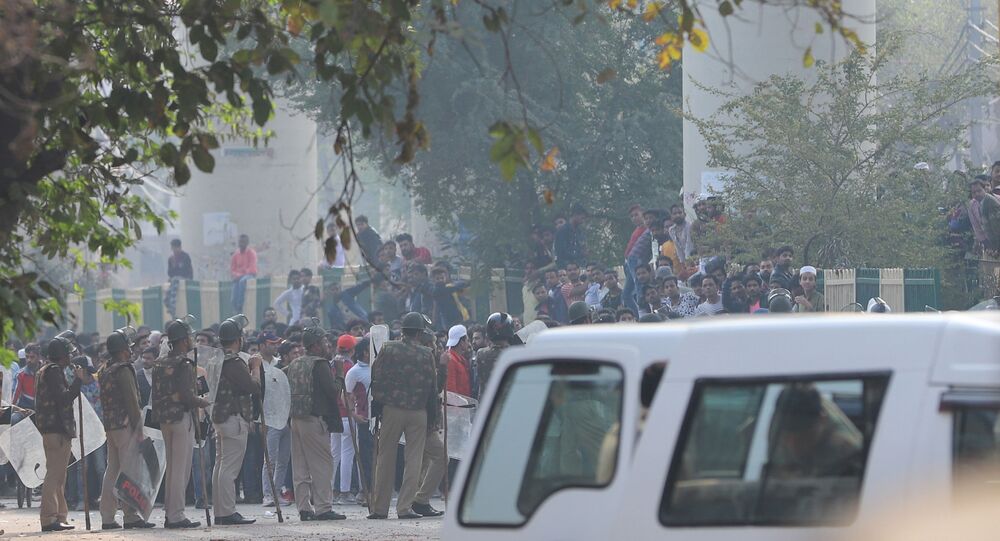 New Delhi (Sputnik): Violence between two groups that started in parts of northeast Delhi on Sunday over the citizenship law issue has taken a communal turn. As many as 22 people have died and 183 others, including 132 civilians, were injured.

India's principal opposition Congress party on Wednesday demanded the resignation of Indian Home Minister Amit Shah, stating it will hand over a representation to President Ram Nath Kovind on the "grim situation" and "loss of lives" in Delhi.

The party is also taking out a "peace march" over the prevailing situation in the north-eastern areas of Delhi.

Addressing a press conference on the violence that erupted this Sunday and continued unabated for next two days, Congress acting president Sonia Gandhi on Wednesday said: "The Congress Working Committee (CWC) is of the firm opinion that what has happened in Delhi is a colossal failure of duty for which the entire responsibility must be borne by the Central government and particularly, the home minister. The CWC calls upon the home minister to tender his resignation immediately."

Appealing to people of Delhi to "reject the politics of hate", Sonia Gandhi also held the ruling Aam Aadmi Party (AAP) in New Delhi responsible for inaction ever since the violence erupted. She sought an explanation from both home minister Amit Shah and Delhi State chief Arvind Kejriwal on the actions taken since Sunday.

Referring to the fact that a midnight hearing had to be held by two Delhi High Court Judges to ensure the safe evacuation of those injured in the violence, Chidambaram questioned the "performance of Delhi Police" in a tweet on Wednesday.

Two High Court judges had to hold a midnight hearing last night to ensure the safe evacuation of injured persons to a proper hospital. What does it say about the performance of Delhi Police?

The violence has continued since Monday and even now there are incidents of violence. It shows the colossal failure of the Delhi Police.

​The new Citizenship Law passed by the Indian Parliament in December has spurred widespread protests across the country. The northeastern states and West Bengal are the hot spots for protests against the law.

Clashes with security forces during protests against the law have seen 25 people lose their lives in the Indian states of Assam, Uttar Pradesh and Karnataka.

The legislation allows citizenship to persecuted Hindus, Sikhs, Christians, Jains, Buddhists, and Parsis from Pakistan, Bangladesh and Afghanistan. It, however, excludes Muslims, which has angered several opposition parties and civil rights activists. Prime Minister Modi asserted on 12 January that the "law gives citizenship and is not snatching it from anyone".