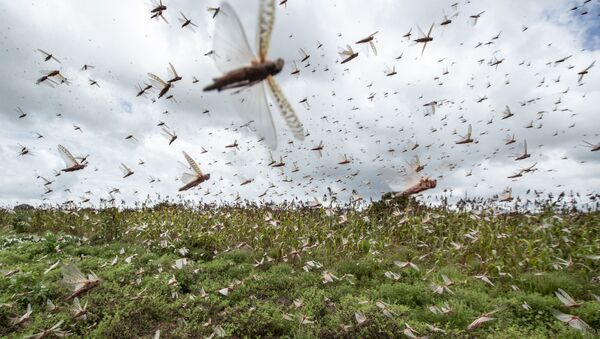 Agricultural officers and soldiers from the Uganda People's Defense Force have been called upon by the government to work together in coating crops with chemicals to ward off and eliminate the destructive desert locust swarms that have invaded the East African country.

Authorities in Uganda are racing to contain the current generation of desert locusts striking the region and have enlisted soldiers from the nation’s army to assist with the matter.

The AFP reported that some 160 soldiers were sent to the northern Ugandan village of Atira to spray trees and plants with pesticides that would kill locusts that attempted to devour or rest on the vegetation.

Priya Gujadhur, a senior official with the United Nations’ Food and Agriculture Organization (FAO) in Uganda, told the outlet that in just one day, “one swarm of 40 to 80 million” desert locusts can devour enough food to feed 35,000 people.

Earlier this month, the UN Secretary-General António Guterres called on countries to devote closer attention and more aid to the ongoing “infestation” of desert locusts in East Africa.

"The UN has issued an urgent appeal for assistance. I ask the international community to respond with speed and generosity to ensure an effective response and control the infestation while we still have the chance," the UN official said.

“As we talk, from Saturday when my district was invaded by locusts, no intervention has taken place, and yet every day, the locusts are laying eggs, and as we know, each one of them lay 300 eggs at once,” Abala said during a Tuesday parliament plenary session, as reported by Uganda-based outlet PML Daily.

Speaking to the AFP, a 73-year-old farmer in northern Uganda’s Lopei village named Zakaria Sagal said that he was “surrounded” by desert locusts when he attempted to plant maize and sorghum.

"We have not yet planted our crops, but if they return at harvest time, they will destroy everything. We are not at all prepared,” he confessed.

Bright Rwamirama, Uganda’s minister of state for the animal industry, on the other hand, claimed during the February 18 plenary session that while there were hiccups in obtaining the proper chemicals used to ward off the desert locusts, the government is now prepared to combat the insects.

“The chemical for aerial spray was not there, but we have procured it. We have also secured two aircrafts; one will be based in Moroto and the other in Soroti. The issue that we are not doing anything is not true,” he said, according to PML Daily. “These yellow locusts which have been laid on table are less destructive. When locusts turn yellow, they are less destructive. We have teams on the ground, and we are managing.”

Rwamirama noted that Somalia, which declared a national emergency earlier this month over the desert locust infestation, and Oman are experiencing the worst results of the insect swarms.

“We are spraying and at the same time, some people are catching locusts. It is not wise to eat locusts because we are spraying. Sprayed locusts have chemicals,” he warned.