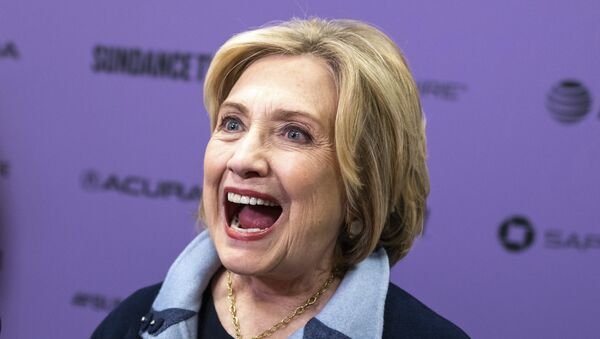 Egor Efimchik
All materials
The Democratic presidential primaries and caucuses have already started, so it's unlikely at this point that Hillary Clinton will enter the race — but she still could become somebody’s running mate.

Mike Bloomberg’s campaign has dismissed reports that he wants Hillary Clinton as his running mate in the US presidential election.

“We are focused on the primary and the debate, not VP speculation,” the campaign's chief communications officer Jason Schechter said in a statement.

The comment came in response to a Drudge Report bombshell that Bloomberg is considering running on the same ticket with Clinton.

The outlet claimed, citing sources close to the Bloomberg campaign, that the former New York mayor would change his official residence from his home state to Colorado or Florida because of a provision in the US Constitution that allegedly forbids a presidential candidate from choosing a running mate from the same state.

However, it appears to be a common misbelief: the 12th Amendment, which specifies the election procedure for the President and Vice President, says that members of the Electoral College must “vote by ballot for two persons, of whom one at least shall not be an inhabitant of the same state with themselves.”

This provision actually governs the actions of electors, and not candidates. It means that every presidential elector must cast a ballot for at least one candidate who is not from their own state – to guarantee that at least half of the votes for a candidate are from a different state.

In practice, the Constitution puts no limitations on candidates being from the same state; if same-state residents still run on a joint ticket, electors from that state must vote only for one of them.

Hillary Clinton, who famously lost the previous presidential race to Donald Trump, has said she’s been under “enormous pressure” to run this year, but ruled out another bid.

Her vice-presidential prospects are not so clear, however, and speculation may well linger on a while since candidates typically name their running mates in weeks leading up to the nominating conventions, which are held in the summer.

Speaking on the Ellen DeGeneres Show last week, Clinton was asked whether she would agree to be on a ticket with the Democratic presidential nominee.

“Well, that’s not going to happen,” she responded. “But no, probably no.”

“I never say never, because I believe in serving my country,” she added. “But it’s not going to happen.”