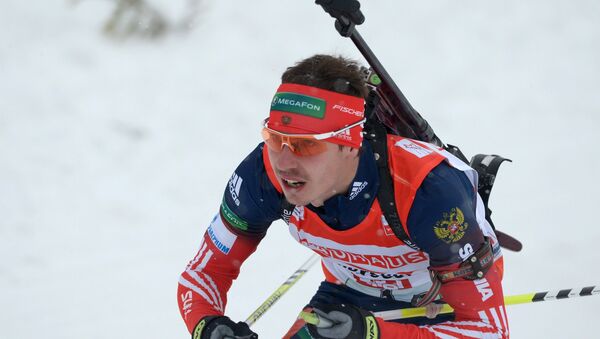 Russian biathlete Yevgeny Ustyugov has been suspended for two years for violating anti-doping rules, and will be stripped of his 2014 Sochi Winter Olympics relay race gold medal, according to the International Biathlon Union (IBU) website.

The disqualification of 34-year-old Ustyugov, who has already completed his career, was made effective on 13 February 2020. The athlete's results between 27 August 2013 and the end of the 2013/14 World Cup season will no longer be recognised. An athlete may appeal the IBU decision to the Court of Arbitration for Sport within 21 days.

Ustyugov, together with Alexei Volkov, Dmitry Malyshko and Anton Shipulin, won the gold medal in the men's relay biathlon at the Olympic Games in Sochi.

WADA Says Would Like CAS Hearings on RUSADA Dispute to Be Public
Due to the decision on Ustyugov, the whole team is expected to lose their gold medals. Germany, Austria and Norway placed second, third and fourth, respectively, and they are set to be given gold, silver and bronze medals.

Ustyugov also won the gold in the mass start and bronze in the men's relay at the 2010 Olympics in Vancouver, as well as two silver medals at the 2011 World Championships in Khanty-Mansiysk.

The decisions on the disqualification of biathletes Sleptsova and Ustyugov were based on a review of the records of the Moscow anti-doping laboratory, the International Biathlon Union said.

The Russian Anti-Doping Agency (RUSADA) was suspended in 2015 in response to accusations about a state-run doping programme in Russia that purportedly helped athletes cheat in international competitions by supplying them with performance-enhancing drugs. Moscow admitted there were some isolated cases of doping but dismissed the allegations that a complex state-sponsored doping scheme was in operation.

Russian athletes were later banned from international competitions, including the 2018 Winter Olympics, with several athletes clear of doping charges allowed to compete under a neutral flag. RUSADA was reinstated in September 2018, on condition that it must provide access to stored lab samples and electronic data.

On 9 December 2019, the World Anti-Doping Agency (WADA) unanimously voted to ban Russia from participating in and hosting any major sporting events as punishment for what it claimed were serious manipulations and deletions of data in athlete test results under WADA investigation.

WADA also announced that only "clean" Russian athletes would be allowed to compete under a neutral status, without the Russian flag or anthem, while Russian government officials and representatives would be banned from attending any major international sporting events. Additionally, WADA declared RUSADA non-compliant with the World Anti-Doping Code.