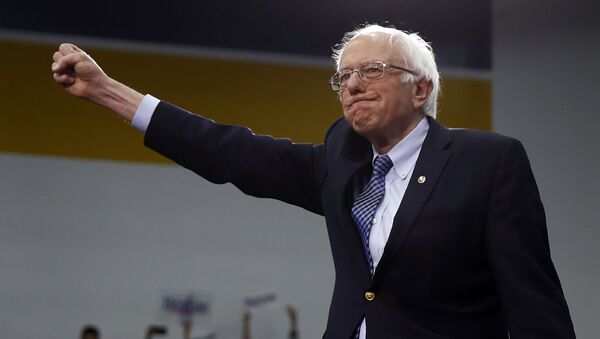 Lexus and Vovan, a duo of Russian YouTubers, are notorious for their pranks of Western politicians and celebrities. They’ve recently launched a show called ‘Stars Save the Earth’, in which they play tricks over the phone posing as Greta Thunberg and her father.

Russian pranksters have fooled US Senator Bernie Sanders in a phone call, claiming the KGB had recruited him to work for the Kremlin.

In audio from an 11-minute phone call posted to YouTube on Thursday, Bernie Sanders thinks he is speaking to the 17-year-old environmental activist Greta Thunberg and her father Svante.

Sanders, who proposes to fight climate change by abandoning fossil fuels and moving towards 100-percent renewable energy, praises the fake Greta for her “extraordinary role… in rallying young people and people throughout the world on this terrible, terrible crisis of climate change”.

'She' returns the favour by saying Sanders is “needed not only in America, but the world”.

The Vermont senator goes on to lament about Donald Trump’s scepticism regarding climate change: “We have a president of the United States now who not only does not recognise the crisis of climate change, but he is actually encouraging more production of fossil fuels. He’s doing exactly the wrong thing.”

The fake Thunbergs say they are eager to “cooperate” and help the Sanders campaign in any way (for the record, the real Svante and Greta Thunberg are Swedish nationals).

Sanders takes the bait and inquires whether they were planning to come to the United States in the next few months.

They reply that they would be there in February 2020 (the call apparently took place some time last year), and Sanders says he would be “very appreciative” if they spoke out in support of his candidacy.

“We can bring some folks together with you, and we can have a wonderful meeting if that’s something you are interested in,” he adds.

The Greta impersonator claims that A-listers Billie Eilish and Kanye West are big fans of Bernie’s, and she has asked them to do “cool rap and a video clip” to support Sanders and engage him more with the younger audience.

A seemingly enthusiastic senator gives his blessing, but the chat takes a more humorous tone as ‘Greta’ suggests that a clip should feature posh cars and Sanders himself wearing jewellery and gold chains.

‘Svante’ asks Bernie for advice on what to do with their alleged invitation to Russia, and he recommends gauging the Russian government’s opinion on climate change before going there, to make the trip as effective as possible.

The pranksters recall Sanders’s 1988 honeymoon in the Soviet Union, where the then-mayor of Burlington, Vermont established a sister-city relationship with Yaroslavl, Russia.

The ‘father’ suggests that Sanders should make Pete Buttigieg, another Democratic front-runner, his running mate. The senator says with a chuckle that he will “take that under advisement”.

‘Greta’ then claims that the KGB “recruited and programmed” Sanders to work for Russia when he was there. “You memory was erased so that the CIA wouldn’t track you down,” she adds.

“Is this what you believe?” Sanders replies.

“Yes,” the girl says. “You’ve become a sleeper agent of the KGB. And now it’s time to wake up and fulfil your mission – become President of the United States, build communism in the United States and work for Russia. I’ll tell you the code phrase and you’ll remember.”

Someone on her end is heard saying “babushka” and “balalaika”, before she declares: “Immediately after that, Russian hackers will begin an operation to bring you to power in the United States.”

A pompous Soviet song plays and the fake Greta’s talk about communism descends into nonsense as Sanders hangs up.

Vovan and Lexus, who’ve trolled figures like Elton John and Recep Tayyip Erdogan, have recently pranked Democratic Rep. Maxine Waters and Joaquin Phoenix posing as Greta Thunberg and her father as part of their show "Stars Save the Planet".

They’ve tricked Waters into promising to save the fictitious island of Chunga-Changa and Phoenix into pledging to lobby for a small role for Greta in a prospective ‘Joker’ sequel.