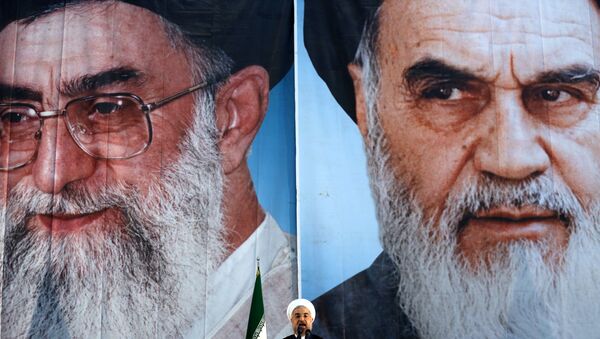 Israel did the right thing by not eliminating Khomeini, believes Eliezer Tsafrir. Had the Mossad done so, the world would have never understood the magnitude of the problem that the "ayatollah regime" has caused.

Like every year, Eliezer Tsafrir, a former Mossad spy and agency station chief in Iran, is going to watch the festivities in Tehran marking the end of the shah's rule and the establishment of the Islamic Republic in 1979.

But he remembers better times, when Israelis were still welcomed in Iran and when Tehran "didn't threaten to wipe Israel off the map".

Longing for the Past

Although Iran objected to the UN partition plan of 1947 that divided Palestine between Jews and Arabs, Iran was the second Muslim-majority country after Turkey to recognise the newly established Jewish state in 1948.

Israel cherished its ties with the Muslim country, especially given the animosity it received from its Arab neighbours. Iran, on its part, feared the growing pan-Arabism under the guidance of Egypt's then leader Gamal Abdel Nasser, and as a result, it regarded Israel not only as a gateway to Washington and its financial support, but also as a natural ally.

The two countries also maintained stable economic relations. Iran was selling oil to Israel, something that many neighbouring countries were reluctant to do, whereas Tel Aviv had become one of Tehran's main exporters, providing it with Israeli goods and services, one of which was the training that Israel's security agencies gave to the notoriously cruel secret police of the shah - the Savak.

"For Israel, Iran was the second most important ally in the world. In the last year of the shah, we had some 1,300 Israelis working in Iran. These were businessmen, agronomists, engineers - you name it", said Tsafrir.

But this wasn't meant to last. "The writing was on the wall. We knew that the days of the shah were numbered but we didn't know when it would all end", he recalled.

In 1978, amid the ongoing unrest, The New York Times estimated that the Iranian monarch had fifteen more years to go until his regime would finally be toppled. The Mossad and even the shah's secret police service held similar views. They were all wrong.

Massive protests erupted in November 1978. During one of the rallies, thousands of demonstrators stormed the offices of El Al, Israel's national carrier, in Tehran.

"They set it on fire so people had to escape the offices through the roof, jumping from one to another, not to fall in the hands of the angry mob", recalled Tsafrir, who was watching the situation closely. 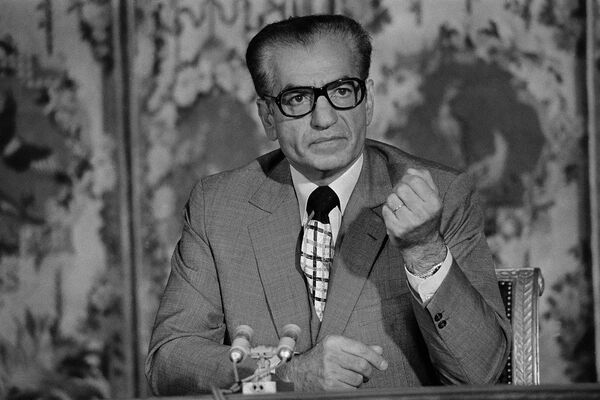 The Shah of Iran, Mohammad Reza Pahlavi, gestures during a press conference at the Trianon in Versailles, near Paris, France on June 27, 1974.
© AP Photo

"It took the authorities five hours to come to the rescue and disperse the crowds and it was then that we realised that we had to take matters into our own hands", said the former spy.

Tsafrir called Tel Aviv and informed his bosses of what had happened. In response, Israel sent three planes aimed at getting all its citizens out, and the former station chief was to supervise that everything went smoothly.

At that point, Israel already realised that relations with Iran had hit a point of no return. But Tel Aviv was far from alone. The shah knew it too and understood the direction his country was taking.

"In December, I was approached by a top official who conveyed to me a personal request from the shah. He wanted to know if the Mossad would be willing to assassinate Ayatollah Khomeini in Paris. I immediately informed Tel Aviv of the request but received a reluctant 'no'. 'Israel is not the policeman of the world, I was told'".

Another Revolution is Inevitable

Looking at the situation now, Tsafrir doesn't have any regrets. "Had we eliminated him back then, the entire world has been against us and the international community would have never understood the magnitude of the disaster we saved them from. They do understand it now".

Tel Aviv and the US accuse Iran of developing a nuclear bomb that they claim could potentially be used against civilians in Israel and other countries, allegations that Tehran denies.

The Islamic Republic is also accused of persecuting minorities, violating human rights, and using excessive force to curb opposition to its regime. "One day all of this will come to an end", Tsafrir believes

"80 percent of the population is young men and women who are tired of the limitations this regime has imposed on them. They want to wear jeans and lipstick, get rid of segregation in public places and, most importantly, they want their rights back". 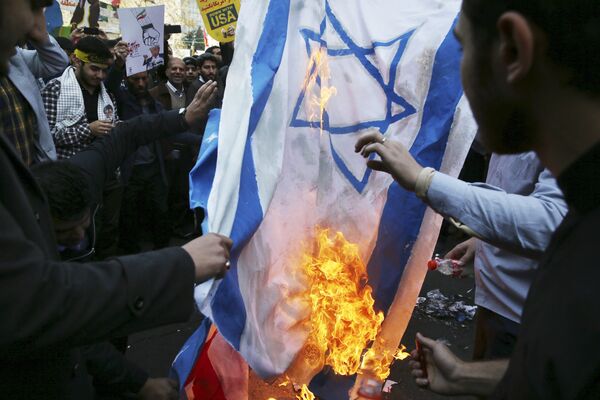 Demonstrators burn representations of Israeli and the U.S. flags during a rally in front of the former U.S. Embassy in Tehran, Iran, on Sunday, Nov. 4, 2018
© AP Photo / Vahid Salemi

Over the years, Iran has seen several major protests against the government of its current leadership. One of the biggest rallies took place in 2009 following the victory of Mahmoud Ahmadinejad in the country's presidential elections.

Hundreds of thousands who believed the elections were rigged took to the streets in Tehran demanding his removal. At least 20 people were killed in the process, while many others were wounded or arrested.