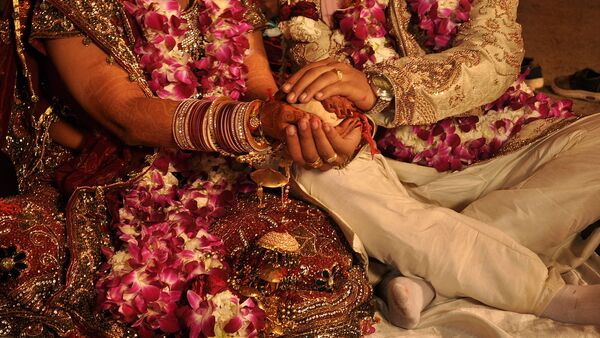 CC BY 3.0 / Yogita / Indian wedding Delhi
Subscribe
New Delhi (Sputnik): Matrimonial website Shaadi.com was accused of caste discrimination in the UK earlier this week. While questions over caste-based matches and discrimination have raised many eyebrows at the international level, the practice is not new to India.

Earlier this week, matrimony website Shaadi.com came under fire in the UK for allegedly discriminating against untouchables or Dalits as higher caste person was not offered lower caste potential matches, unless adjusted they specifically searched to include all other castes. The website has refuted allegations that its policy is inconsistent with the country's equality laws.

However, Dalit activist Dilip Mandal believes that endogamy is a basic feature of the caste-system and without endogamy, the caste system or Hinduism will not survive, as "it is the basic feature".

“If someone is a Hindu, he/she has to practice endogamy to continue Hinduism. It’s not something that they are doing which they don’t want to. It is something written in scriptures that they are following,” Mandal told Sputnik

Commenting on the matter of Shaadi.com controversy and quoting BR Ambedkar, an Indian social reformer who campaigned against discrimination towards the Dalits, he said: “Wherever the Hindus will go, they will carry the burden of caste and infect the people with their disease. Hinduism is a disease and they will make everyone sick. They have carried caste with them to foreign countries”.

In Indian caste system, society is divided into four castes and those at the lowest strata of the hierarchy were traditionally called untouchables, also known as Dalits. The caste not only defined the jobs available to the person born into it but also prohibits inter-caste marriages.

Mandal says: “Most of the matrimony advertisements in the newspapers are given by Brahmins and Baniyas (upper castes). These two castes are posting most of the ads. This reflects not only the sociological structure but also the economic structure of the society. They are prosperous and they are in position to post advertisements in the newspapers.”

"Untouchables", the lowest group in India's caste hierarchy, or "Dalits" as they prefer to call themselves, make up 16 percent of the country’s population, around 201 million people. Considered 'impure' in the caste system, they have been subjected to centuries of oppression, resulting in social and economic backwardness.