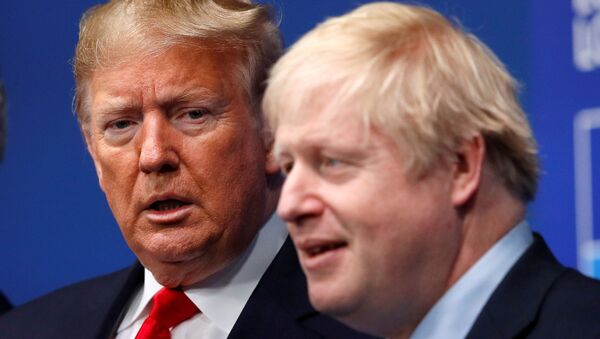 The UK decided to allow tech company Huawei to be involved in the development of its 5G cellphone network last week, following threats by the US that a post-Brexit trade deal would be untenable if the Chinese firm was given access.

A conversation between US President Trump and British Prime Minister Boris Johnson reportedly became heated over the United Kingdom's decision to allow Chinese telecoms giant Huawei to have a role in the UK's new 5G network last Tuesday.

Anonymous sources in London and Washington described the call between the two anglosphere leaders as "apoplectic" to the Financial Times.

One individual who was reportedly familiar with the call's contents said that Trump expressed his views in livid terms and a second official confirmed that the conversation was “very difficult”.

British government officials with knowledge of the exchange said they were taken aback due to the ferocity of the president’s language towards Johnson.

Since the call, the UK has agreed to limit the use of Huawei products.

Attorney General William Barr suggested on Thursday that the US is encouraging international competition by purchasing controlling stakes in tech companies Ericsson and Nokia.

“It’s all very well to tell our friends and allies they shouldn’t install Huawei’s, but whose infrastructure are they going to install?" Barr said.

Despite Johnson being accused of following the US administration in pursuit of a trade deal, the decision to include Huawei is not the only divergence from the UK's traditional ally, as London also supports the Iran nuclear agreement which Trump withdrew from in 2018.

The US has made blocking Chinese technology a top priority since the ascension of Donald Trump to the presidency, with Washington expressing opposition to Huawei having stakes in next-generation cellular networks, claiming that the company poses a risk to national security.

China, however, is adamant that the US is more concerned with preventing competition as opposed to any sincere concerns over security.