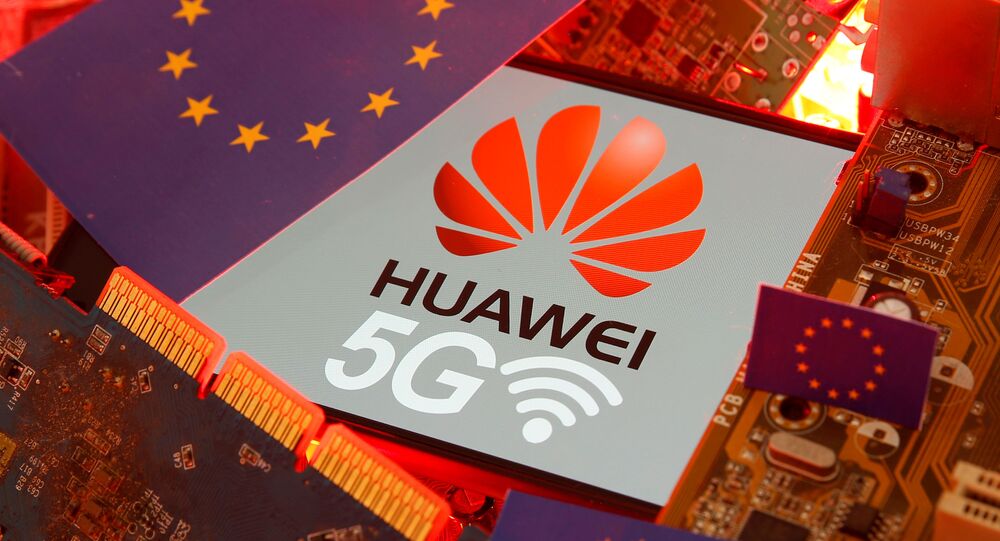 The UK and the EU have opted for limited use of Huawei 5G telecom equipment, defying the US' repeated requests to totally ban the Chinese company amid threats to cease intelligence cooperation over security concerns. Fabio Massimo Parenti has explained what's behind Europe's reluctance to follow Washington's suit.

On 28 January, the UK government said that it would use Huawei's equipment in its 5G networks despite growing pressure from Washington, which has branded the Chinese telecom giant a security threat.

Though the Boris Johnson cabinet specified that Huawei's role would be limited only to 35 percent market share in the country’s network periphery, the move prompted concerns in the US: on 4 February, House Republicans sponsored a resolution denouncing the British government's decision and warning that it could affect the UK-US "special relationship".

US President Donald Trump has repeatedly warned London against continuing cooperation with the Chinese tech firm and threatened to cut off shared security ties within the Five Eyes - an anglophone intelligence alliance comprising Australia, Canada, New Zealand, the UK and the US.  However, instead of fulfilling its threat the Trump administration signalled that the UK has a chance to "relook" at its choice.

Why Europe is Not Ready to Cut Off Ties With Huawei

Meanwhile, on 29 January, the European Commission endorsed the EU toolbox on 5G network security risks aimed at helping member states to deal with the challenges related to the roll-out and use of the next-generation networks.

Despite Washington's calls for totally banning Huawei from the European 5G network infrastructure, the EU guidelines open the door to the vendor.

Huawei welcomes Europe’s decision, which enables #Huawei to continue participating in Europe’s #5G roll-out. This non-biased and fact-based approach towards 5G security allows Europe to have a more secure and faster 5G network.https://t.co/omUfY81EEO

​ According to The Verge, the EU toolbox's approach to Huawei's equipment "mirror many elements of the UK’s decision".

Fabio Massimo Parenti, an associate professor of economic and political geography at the Lorenzo de'Medici Italian International Institute in Florence, Italy, says that Washington's repeated attempts to expel Huawei from the European market is nothing short of a longstanding "competitive game" between China and the US.

He believes that Washington is "still approaching the world economic changes according to a Cold war mentality" and is viewing Huawei as a tool of the Chinese Communist Party.

"Security risks, supposed and alleged, have never been proved", the academic highlights. "This is why, analysis by analysis, UK and many other countries will further move to cooperate with Huawei for new telecom infrastructures. Each country is defining the possibility to enhance control over the new infrastructures, as decided months ago by the current Italian government".

According to Parenti, European countries have a good reason to stick to the Chinese tech company.

"The current presence of Huawei devices, telecom equipment, and research labs in Europe is a solid reality, evolved in the last 20 years", he elaborates. "Almost everywhere in Europe, Huawei guaranteed important flows of investments, employed locals and participated in national telecommunication development plans. 4G networks have been built often with Huawei".

Parenti says that Huawei is "the most innovative company to develop fast speed telecom infrastructures" with reasonable prices.

"So said, it is not surprising the UK’s recent permit to open finally to Huawei 5G technologies for building national infrastructures", he points out. "Neither it can be surprising Huawei announcement to build new European hubs. Economic logics are prevailing in European members’ choices. At the same time, there is not a suitable alternative to Huawei’s technologies".

As Reuters reported Wednesday, Trump administration officials are expected to meet later this month to discuss new restrictions against Huawei after the US Commerce Department withdrew a rule aimed at further diminishing foreign shipments to the Chinese company due to objections from the US Defense Department.

Last May, Washington banned Huawei and its 68 affiliates in the US, urging IT companies across the world to cut off ties with the Chinese telecom firm accusing it of working on behalf of the Chinese government, something that the tech giant resolutely denies. Though the Trump administration later issued waivers for Huawei allowing it to buy hardware and software from American companies for maintenance purposes, many global tech companies halted cooperation with their Chinese counterparts.