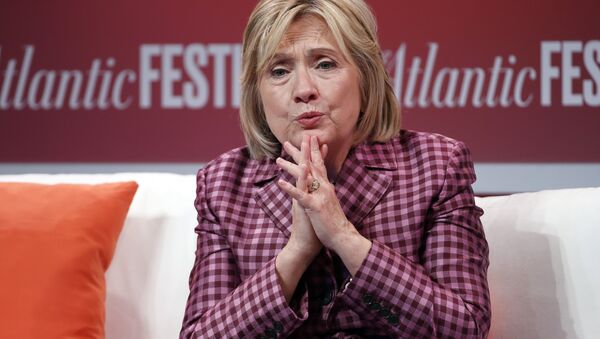 On Monday, a coding issue with the mobile app that the Iowa Democratic Party planned to use to report the results of their state caucus caused a massive delay in declaring the winner.

People who worked on Hillary Clinton’s failed presidential campaign were behind the app that caused chaos in the Iowa caucus on Monday night.

The smartphone app was designed by Shadow, Inc., a Colorado-based tech company founded by Gerard Niemira and Krista Davis, to make collecting and reporting the results easier and quicker.

Both Niemira and Davis worked for the Clinton campaign in 2015-2016. According to their LinkedIn profiles, Niemira, who is the company’s CEO, was Clinton’s director of product and senior product manager, and Davis served as special assistant to the campaign’s chief technology officer.

Prior to the caucuses in Iowa – traditionally the first state to vote in presidential primaries – the state party had kept silent about the creator of the data-reporting app, which came under scrutiny after a chaotic delay in the announcement of the results.

President Donald Trump won the Republican contest with 97 percent of the vote, but the Democratic vote was in disarray because of what state officials called a “coding issue”.

A spokeswoman for the Iowa Democrats said on Monday the delays were caused by “inconsistencies in the reporting of three sets of results”, adding that this was “simply a reporting issue… not a hack or an intrusion”.

Shadow is affiliated with Acronym, a Democratic-aligned non-profit set up in 2017 to “build power and modern infrastructure for a new progressive movement”.

In January 2019, Acronym’s founder and CEO Tara McGowan announced that her company had acquired Niemira’s Groundbase and launched Shadow to “build smarter infrastructure for campaigns”.

I’m so excited to announce @anotheracronym has acquired Groundbase, the best CRM + SMS tool on the political market, along with their incredible team led by @gjniemira + are launching Shadow, a new tech company to build smarter infrastructure for campaigns https://t.co/rGQQCORzvt

According to Business Insider, Acronym had previously stated in the “About” section of its website that it had “launched Shadow”, but that statement now reads “invested in Shadow” with no mention of launching the firm.

Acronym also put up a statement further distancing itself from the trouble-plagued affiliate.

The Democrats paid Shadow $63,000 to build the app in two installments in November and December 2019, state financial records say; the app was “quickly put together in just the past two months”, according to reporting by The New York Times.

The Nevada Democrats had also paid $58,000 to Shadow to use their app in the state caucuses due at the end of this month, but Nevada Democratic officials said on Tuesday they would drop their plans to avoid a repeat of Iowa’s failure.

Gerard Niemira said in a statement: “We sincerely regret the delay in the reporting of the results of last night's Iowa caucuses and the uncertainty it has caused to the candidates, their campaigns, and Democratic caucus-goers. As the Iowa Democratic Party has confirmed, the underlying data and collection process via Shadow’s mobile caucus app was sound and accurate, but our process to transmit that caucus results data generated via the app to the IDP was not.”

With only 71 percent of precincts reporting in Iowa, Pete Buttigieg and Bernie Sanders are leading the Democratic field with 26.8 and 25.2 percent of the state’s delegate count, respectively. They are trailed by Elizabeth Warren with 18.4 percent and Joe Biden with 15.4 percent. Another Democratic front-runner, Mike Bloomberg, has snubbed the state caucuses and is focusing on the larger Super Tuesday states.