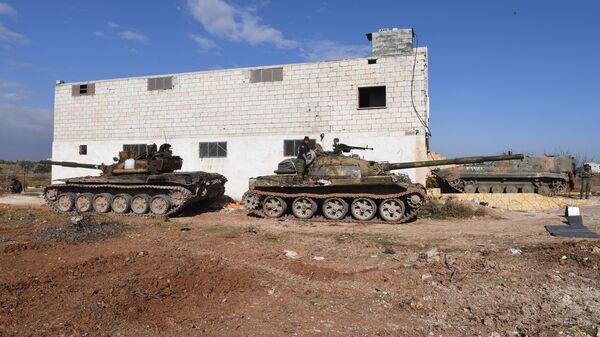 Turkish President Recep Tayyip Erdogan earlier expressed readiness to retaliate after its servicemen were killed in the province of Idlib in an attack by Syrian government forces.

The General Staff of the Syrian army said it gives one last chance to the militants operating in the province of Idlib to lay down their arms, Ikhbariya news agency reported on Tuesday citing a military source, adding that the Syrian Army was ready to repel any Turkish aggression in the province.

"Our armed forces are trying to give the last chance to the militants and save the lives of the besieged civilians. The army units operating in the region have been ordered to allow those who decide not to rely on the support of the Turkish forces, to surrender their weapons", the source said.

The source added that the Syrian Army was continuing its military operation against the militants, who have been fighting civilians and using them as "shields" in Saraqib and Tell Touqan in Idlib.

On 3 February, the Turkish Defence Ministry said that six Turkish servicemen had been killed in an attack by the Syrian Army in Idlib.

The Turkish military presence in Syria has never been sanctioned either by Damascus nor the UN Security Council. Turkey says its forces are deployed in the region in order to prevent conflicts in Idlib.

Fighting has escalated in Syria's Idlib recently, as the Syrian government has been struggling to recapture control over the area, which remains a major terrorist stronghold in the country.

Idlib is home to various militant factions, with a large portion of it controlled by Hayat Tahrir al-Sham (formerly known as Al-Nusra Front*), the Syrian branch of al-Qaeda*.

In September 2018, Moscow and Ankara agreed to set up a demilitarised zone along the contact line between the armed opposition and Syrian government forces in Idlib. However, not all militants have laid down their arms, with the province remaining a stronghold of various terrorist groups.