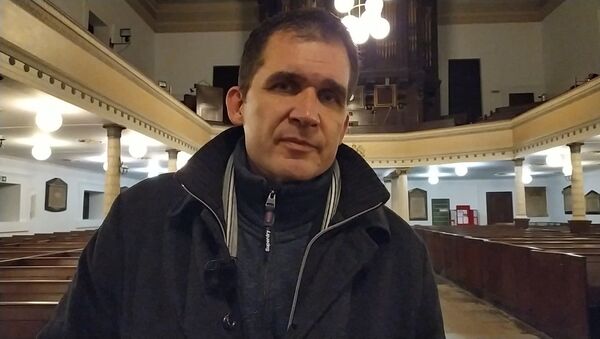 Mohamed Elmaazi
All materialsWrite to the author
Professor Nils Melzer, the UN Special Rapporteur on Torture, says that the governments of the US, Sweden and the UK have shown “bad faith” in failing to address evidence that WikiLeaks founder Julian Assange has been subjected to torture.

Julian Assange's main extradition hearings will be split into two parts, with the first set of hearings due to start on 24 February. The publisher faces up to 175 years in prison in the US on charges relating to his role in publishing classified US documents, which exposed alleged war crimes committed by US and UK occupation forces in Iraq. After examining Assange in Belmarsh prison Professor Nils Melzer, the UN’s Special Rapporteur on Torture and Other Cruel, Inhuman or Degrading Treatment or Punishment, and two other renowned experts in examining torture victims, concluded that the journalist and publisher showed symptoms of “psychological torture”.

It was recently revealed that the US government is now claiming that protections for a free press and free speech under the US constitution don't apply to foreign journalists.

Professor Melzer talks about how his mandate as an independent UN expert has compelled him to speak out, when Britain, the US, and Sweden failed to properly address his concerns in Assange's case.

Sputnik: Define torture for me, legally speaking. How is it distinguished from "cruel, inhuman or degrading treatment"?

Nils Melzer: Well, obviously there's a long treaty definition, but the long and the short of it, in a nutshell, torture is when you instrumentalise, deliberately, the infliction of pain and suffering in order to either coerce or intimidate or punish or discriminate against someone.

[The full title of my position says] torture or ‘other cruel inhuman or degrading treatment or punishment’, which means that torture is one form of cruel, inhuman or degrading punishment or treatment. And so what distinguishes torture from other forms is simply that it is purposeful and deliberate. That you can, for example, have negligent infliction of severe pain and suffering, by, you know, just forgetting to feed prisoners. And that would not necessarily be torture because you're not pursuing a particular purpose with it. It's still cruel, inhuman or degrading and is still prohibited, but it's not torture.

Sputnik: I heard you recently say that all forms of torture ultimately have an emotional and a psychological component or they are ultimately targeted towards mind and emotion. Can you explain what you meant by that?

Nils Melzer: Because it is purposeful. It means you're instrumentalising pain and suffering in order to achieve something. You don't just want to break someone's body, you want to make them do something or not  do something and you want to intimidate them or force them to comply with your will. You want to break their will. So ultimately you're always targeting someone's will. You can either go through the avenue of inflicting physical pain and suffering, in order to influence the will, or you can pass through the psychological realm without causing physical pain and suffering.

Sputnik: And this is what you found? I mean, what is it exactly that you found in the case of Julian Assange?

Nils Melzer: Well, Julian Assange clearly was exposed to a cumulative kind of a torturous  environment where you have an intense campaign, a concerted and systematic and state sponsored campaign of defamation in relation, certainly, primarily to the rape allegations - that were never substantiated and never even led to criminal charges. And it just disappeared in history without any form of accountability.

You had the increasing isolation. You had intense surveillance and then also very serious threats including death threats.

Sputnik: And is isolation part of what led to your conclusion that Assange has been psychologically tortured?

Nils Melzer: Well, certainly, I mean it is a classic component of psychological torture. The first step is basically that you start to isolate the person from the normal environment. You start to expose them to the, to an increasing control over all his aspects of his daily life by… imposing, torturing power. And then you start deconstructing and destabilising their psychology and their mental stability in various ways.

Sputnik: So can you explain why this particular case has been so important for you, that you’ve found yourself going on the news, quite a bit, and speaking events, even rallies. How has this case.. I mean, do you behave the same way in other cases that you also deal with?

Nils Melzer: No, well, obviously I wouldn't have the resources to pursue every single case with the same type of energy. I think this one is particular in that it is emblematic, it shows a systematic failure in Western democracies to adhere to the Rule of Law and to their own or human rights commitments. And that's what I think is so worrying because it sets a precedent, also muzzling the free press and criminalising, you know, saying the truth in a way that is fundamentally threatening to the future of our democracies. So I felt that this particular case, obviously Julian Assange’s suffering is as important as anyone else's, you know any migrant child somewhere in Mexico. But the precedent that this case sets is of overwhelming importance.

Sputnik: Can you speak about your mandate as the UN special rapporteur on torture? What exactly is your mandate?

Nils Melzer: I'm mandated by the UN Human Rights Council to report to the UN member States about their compliance with the prohibition of torture and to make recommendations on how to improve that compliance. I can do that by visiting their countries and evaluating their prisons. I can intervene on behalf of individual victims every day and I can write thematic reports, such as I did on psychological torture now.

Sputnik: I've been told by someone that there are some people at the UN who believe that you've exceeded your mandates. In the case of Julian Assange. That speaking out the way you have, makes you look partisan, and might actually even not assist his case. Can you understand those concerns and how do you respond to them?

Nils Melzer: Well, I initially was reluctant to get into the case and I was, if anything, I was partial on the other side, against Julian Assange, because I suspected somehow that he wanted to manipulate my mandate. Because I had been poisoned by the same type of public… narrative about him as anyone else has. What I have realised through that investigation is that we have a systematic problem that needs to be addressed.

That there are three ways in which my mandate is affected:

·        Julian Assange has a disclosed, exposed torture that has not been prosecuted systematically;

·        If extradited to the US he likely to be tortured until the day of his death.

Sputnik: Before you became a UN torture expert, you had a number of years of experience, including working with the ICRC (International Committee of the Red Cross). Could you briefly tell me about your background in terms of your legal experience and your work, how that prepared you for what you currently do at the UN?

Nils Melzer: Well, I, yes, I studied the law in Switzerland. I worked at the district court, for a couple of years. And then I joined the ICRC. I became a legal advisor there, spent 12 years with the ICRC in war areas in the Balkans, in the Middle East. And also then in Geneva I led an expert group expert group, evaluating the adequacy of international humanitarian law in the ‘War on Terror’. So that's kind of the background in terms of humanitarian law. I then also, when I left the ICRC, I became a Professor of international law in Geneva and in Glasgow, and then was appointed [UN] Special Rapporteur on torture in 2016.

Sputnik: To what extent is the opinion by the UN Working Group on Arbitrary Detention [that Assange was being arbitrarily detained by the UK, US and Sweden and should be allowed to leave the embassy and go to Ecuador] merely persuasive or binding on the United Kingdom?

Nils Melzer: Well, all the special procedures mandates of the United Nations… their decisions don't have a binding force, because that's how UN member States wanted to frame this. But they have given official mandates to these bodies to, you know, make recommendations and observations on these cases. So if you're appointing a panel of experts and submitting evidence to them, in the expectation that they will then render decision, I think it borders on bad faith, then, if you don't like the decision that comes out of it, you just say, ‘Oh, it's not binding anyway’, and just ignore it.

Nils Melzer: Look, I come from very conservative institutions like the International Committee of the Red Cross. I was a national security advisor for the Swiss government, Swiss [Federal Department of] foreign affairs. I've worked for conservative think tanks like the Geneva Centre for Security Policy and that's exactly how I conducted my mandate. So I stick to my procedures, in good faith, and I submitted my observations and my recommendations to the governments involved in various cases, including now the Assange case.

Obviously, then, if states don't react in good faith, if they ignore my recommendations, they don't even, I mean they don't have to agree with me, but at least have to respond. I mean that's my function. They mandated me to investigate cases and submit my observations and make recommendations and ask questions in the expectation obviously that they then would respond and we can clarify these issues.

But when I see the government simply ignore my recommendations and refuse to engage in a dialogue then I have to move to different forum, because then there we have bad faith in play and bad faith in the implementation of the prohibition of torture is not a good thing for anyone.

Sputnik: And do you normally get a proper response when dealing with other countries, like Iran or Russia?

Nils Melzer: Russia, remarkably, has a tradition of sending very elaborate responses. Not in every single case, but I have to say they are certainly much more consistent than what I've received from the UK in the last year.