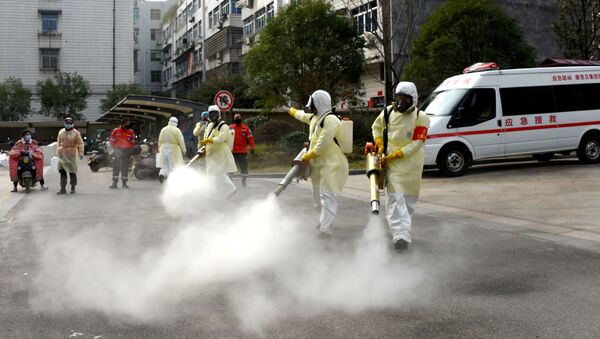 New Delhi (Sputnik): Airlines around the world have been suspending all flights to China following the outbreak of the virus which has already claimed the lives of over 200 people.

Pakistan on Friday became the latest country to halt flights to and from China with immediate effect, in the wake of the rising death toll from the virus outbreak in the country, and the World Health Organisation (WHO) declaring it a global health emergency.

At least 18 countries have reported cases of the Novel Coronavirus so far.

Currently, Pakistan operates flights to and from the Chinese cities of Beijing, Hong Kong, Guangzhou and Shanghai.

“We are suspending flights to China until 2 February,” a senior Pakistan civil aviation ministry official said. He further stated that a review of the situation prevailing in China and its impact around the rest of the world would be undertaken next week.

In Pakistan’s port city, the Karachi Port Trust (KPT) announced that all personnel of Chinese and South-East Asian origin would be quarantined as a preventive measure. Ships coming into Karachi from these areas are being checked, and the movement of their personnel is being restricted, following the outbreak of the virus.

On Friday, Pakistan’s Foreign Office (FO) said the government had contacted the relevant authorities in Beijing, urging them to ensure the safety of all Pakistani citizens in China, especially in the virus-hit city of Wuhan in Hubei province.

“Islamabad is monitoring the evolving situation and will take a decision after consultations among all the stakeholders,” a foreign office spokesperson said.

Apart from Pakistan, aviation authorities in Russia, the US, the UK, France, South Korea, Egypt, Germany, Austria, Kenya and Switzerland have suspended their flights to China. These countries have also issued travel and alert advisories to their citizens to avoid to and fro travel to China.

The US and Japan have also raised the levels of their respective travel advisories for China, informing their citizens to reconsider and avoid journeys to China due to the spread of the Novel Coronavirus. As a precaution, Russia has sealed its remote far-eastern border with China. Other countries have banned the entry of travellers from the city of Wuhan, China, where the virus surfaced and has had its most devastating impact.

The new coronavirus — named 2019-nCoV is thought to have originated in a food market in the city of Wuhan and has since infected more than 9,000 people worldwide (9,825). China first reported the outbreak of the virus on 30 December 2019. Since then, Beijing has put in place travel restrictions. Financial markets across China have also been closed until 3 February.