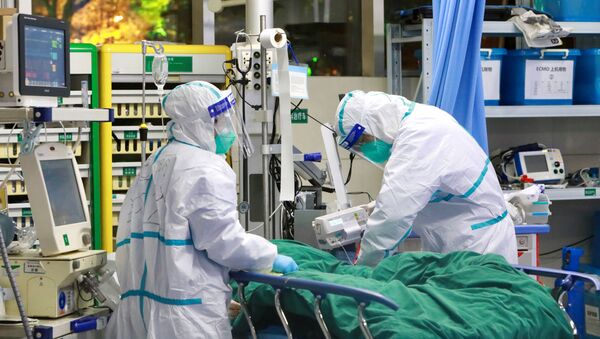 © REUTERS / CHINA DAILY
Subscribe
International
India
Africa
The United States Secretary of Health and Human Services Alex Azar on Friday announced that any Americans who travel to China's Hubei province will be subjected to a mandatory 14-day quarantine and undergo additional health screenings at designated centers.

During the televised briefing, Trump administration officials noted that the coronavirus is a public health emergency in the US, but stressed that the virus was at a low risk for Americans.

​According to Azar, foreign nationals, other than immediate family of US citizens and permanent residents, who have traveled to China within the past 14 days could be denied entry into the US. Additionally, US citizens who have been in China's Hubei Province, where the virus originated, "will be subject to up to 14 days of mandatory quarantine to ensure they’re provided proper medical care and health screening," Azar noted.

US citizens traveling from Hubei will be quarantined at Department of Homeland (DHS) designated sites whereas those traveling from other parts of China will be screened at ports of entry and asked to quarantine themselves at home for the 14-day duration.

Although Robert Redfield, director of the US Centers for Disease Control and Prevention (CDC), reiterated that the risk of a coronavirus outbreak in the US is low, he did also note that there are 191 people in the US under investigation for potentially carrying the virus.

Three US airlines on Friday, namely Delta, United and American, all volunteered to suspend service to mainland China. According to US Acting Department of Transportation Undersecretary Joel Szabat, no additional transportation suspensions will be enforced yet.

As of Friday, the virus had infected around 10,000 people around the world. The virus has also caused at least 213 deaths. No deaths have yet been reported outside of China.

Following the US government's declaration that the coronavirus is a public health emergency, stock markets immediately plunged by more than 600 points.

The World Health Organization (WHO) on Thursday declared that the virus, which originated in city of Wuhan in Hubei Province some time in December, is a public health emergency of international concern.

The CDC also confirmed Thursday the first case of person-to-person transmission of the virus within the US.

The spread of the Wuhan coronavirus has been compared to the severe acute respiratory syndrome (SARS) outbreak, which was first reported in Asia back in 2003 and was caused by a similar coronavirus. It spread to 37 countries in North America, South America, Europe and Asia, infecting more than 8,000 people and killing 774 in 2003 over a six-month-period before being contained. The Wuhan coronavirus has already infected some 10,000 people in about a month’s time.