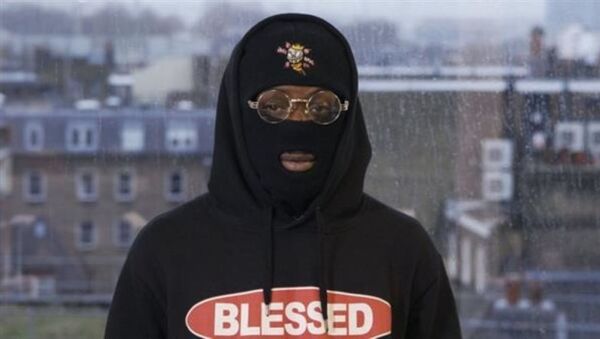 © Photo : Twitter / @jenkers_en
Subscribe
London mayoral campaigns will kick off in the spring, with the election held on 7 May. Artist and rapper Drillminister has hit out against the major candidates in recent days, pursuing his own campaign for election.

Rapper Drillminister announced on Tuesday that he is standing for the Mayor of London election, to oust Labour's Sadiq Khan.

The musician, whose face is covered by a balaclava in public and in performance, is joining the race, saying he is inspired by the success of US President Donald Trump.

🚨EXCLUSIVE: @Drillminister has announced that he is running for London Mayor to replace @SadiqKhan. "They're gonna see the power of the youth," he says. Other candidates include @ShaunBaileyUK & @RoryStewartUK. pic.twitter.com/8f5vcMJPiF

​The performer accused other contenders of not being proper Londoners, claiming instead that he accurately represents the people of the city.

"People are just trying to find their way through this maze we call London life and I think we need a mayor that kind of resembles what people recognise as a Londoner as opposed to somebody dictating to them what a Londoner is", he said.

The rapper cited his great-grandfather, who fought in the Second World War, as inspiration for his run.

"So if my grandfather's sacrifice to make sure that we can all be free today and I can have this opportunity to make people vote for me isn't good enough, then I don't know what people understand of democracy because that is what Drillminister stands for, democracy".

Pledges in his manifesto reportedly include increased mental health support and funding for housing in the capital.

While speaking to LBC earlier on Tuesday, the masked musician accused incumbent Khan of using the London mayoralty as a "stepping stone" to being prime minister.

"He's here for himself. Rory Stewart doesn't represent anyone from my background".

The announcement comes as London gears up for a mayoral election on 7 May 2020.

Incumbent Khan has held the office since 2016, and is seeking re-election even as the main challenge comes from Conservative Shaun Bailey.