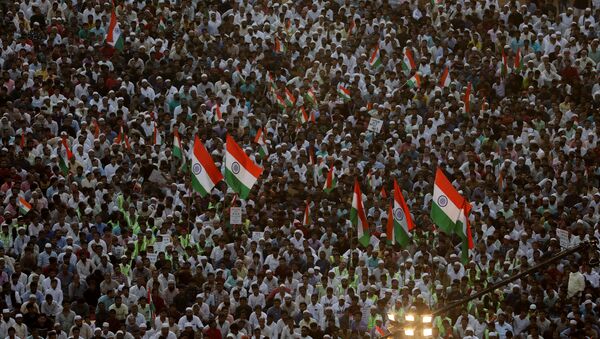 © REUTERS / FRANCIS MASCARENHAS
Subscribe
New Delhi (Sputnik): India's opposition political parties, students, and people from other walks of life have been protesting against the government over its decision to implement the Citizenship Amendment Act (CAA) and for going ahead with exercises like the National Register of Citizens (NRC) and the National Population Register (NPR).

The chief of one of India’s main opposition parties, the Dravida Munnetra Kazhagam (DMK), on Friday stepped up his campaign to thwart the central and state governments from implementing the contentious Citizenship Amendment Act (CAA), the National Population Register (NPR), and the National Register of Citizens (NRC) in the southern Indian state of Tamil Nadu.

The CAA, NPR, and the NRC have been strongly opposing the legislation in different parts of the country, particularly in Tamil Nadu’s neighbour Kerala. Kerala was the first state in the southern part of India to declare that it would block all moves by Prime Minister Narendra Modi and his government to impose the act and its related exercises

At a meeting of his party and its allies, M.K. Stalin, the DMK chief, said he would start a week-long signature campaign from 2 to 8 February to build up public support against such laws and exercises that could divide society along communal lines.

"All alliance party leaders and cadres will be involved in this signature campaign. We will complete this campaign and submit a memorandum to the Indian President Ram Nath Kovind", Stalin said.

He further stated that the CAA should be completely withdrawn, while activities related to both the NRC and NPR should not be allowed to take root in Tamil Nadu.

Stalin’s latest political salvo against Prime Minister Modi and his BJP-led government, and the state government which is governed by DMK’s arch-rival -- the All India Anna Dravida Munnetra Kazhagam (AIADMK) – came as protests intensified across Tamil Nadu against the CAA, NRC, and NPR.

Flag and banner-waving and sloganeering protesters were seen participating in sit-down agitations.

The controversial CAA grants citizenship to persecuted Hindus, Sikhs, Christians, Buddhists, and Parsis from Pakistan, Bangladesh, and Afghanistan, who came to India before 1 January 2015. Passed by the Indian Parliament last month, many see it as unconstitutional legislation that seeks to grant citizenship on religious grounds and discriminates against Muslim community.

India’s Home Minister Amit Shah, however, has clarified that the CAA, NRC, and NPR exercises are not against any Indian citizens of any community, but for the benefit of persecuted immigrants from the three aforementioned countries.

The National Register of Citizens (NRC), an official record of those who are legal Indian citizens, includes demographic information about all individuals who qualify as citizens of India under the Citizenship Act, 1955. The register was first prepared after the 1951 Census of India and is now in the process of being updated by the government. Prime Minister Modi has clarified it has not even been discussed in any cabinet meeting.

The National Population Register (NPR) is a register of regular residents in the country. A regular resident is defined as a person who has resided in a local area for the past six months or more or a person who intends to reside in that area for the next six months or more. It is being prepared at the village, town, district, state, and national level under the Citizenship Act 1955 and the Citizenship (Registration of Citizens and issue of National Identity Cards) Rules, 2003.

The government has declared it is mandatory for every “usual” resident of India to register himself or herself in the NPR.

On 22 January, India’s Supreme Court refused to put a stay on the implementation of the Citizenship Amendment Act, the National Register of Citizens, and the National Population Register.

It also instructed all high courts not to entertain any pleas on the CAA until the apex court finishes deciding on this matter.