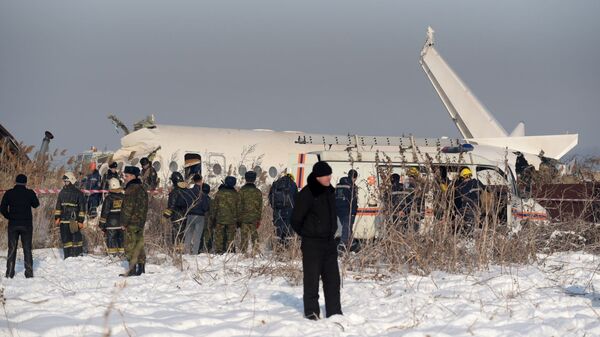 © Sputnik / Timur Batyrshin
/
Go to the mediabank
Subscribe
International
India
Africa
NUR-SULTAN (Sputnik) - At least 300 people have been questioned during an investigation into the plane crash near the Kazakh city of Almaty, Kazakh Deputy Prosecutor General Marat Akhetzhanov said on Wednesday.

"There is a criminal case, an investigation will be conducted, which would study all circumstances that led to these tragic events. 300 people were questioned," Akhetzhanov said.

The AAK said earlier in the week that an inspection revealed a number of violations into the airline operator’s activities.

The Bek Air Fokker 100 plane, heading to the Kazakh capital of Nur-Sultan with 98 people on board, crashed on 27 December 2019, soon after takeoff. It lost altitude, broke through a concrete fence and hit an empty two-story building. Twelve people were killed and 69 others were injured in the crash. The Kazakhstan Aviation Administration (AAK) launched an investigation into the incident.