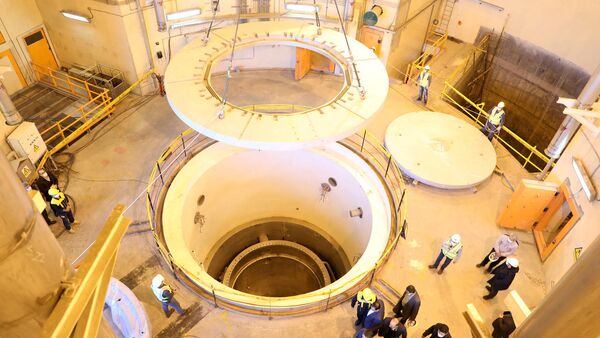 "We consider it necessary to respond to the US special representative for Iran Hook about the existence of some kind of 'UN standard' prohibiting the Islamic Republic of Iran from enriching uranium. Unfortunately, such mythmaking has long been a par of the course in the US approach toward nuclear non-proliferation ... In this case, we have, essentially, an accusation against the UN Security Council of making decisions contradicting the Treaty on the Non-Proliferation of Nuclear Weapons (NPT)", the ministry said in a statement.

It also recalled that the aforementioned treaty allows the signatories to develop nuclear energy for non-military purposes.

"In other words, the NPT puts no limitations on the non-nuclear countries regarding uranium enrichment or developing other stages of the nuclear fuel cycle. There is only one condition: that all work must be directed toward peaceful ends and be under IAEA [International Atomic Energy Agency ] supervision", the ministry noted.

Speaking about the Security Council's resolution against Iran, the ministry noted that all pre-2015 resolutions were temporary did not aim to limit Tehran's right to pursue the peaceful use of nuclear energy.

In 2015, Iran signed the Joint Comprehensive Plan of Action (JCPOA) with China, France, Germany, Russia, the United Kingdom, the United States, Germany, and the European Union. It required Iran to scale back its nuclear program and severely downgrade its uranium reserves in exchange for sanctions relief.

In 2018, the United States abandoned its conciliatory policy on Iran, withdrawing from the JCPOA and hitting Iranian petroleum industries with sanctions.

On 8 May 2019, the first anniversary of the United States' unilateral withdrawal from the agreement, Tehran announced a gradual reduction of its JCPOA obligations. On 5 January, following the killing of Iran's top military commander Qasem Soleimani in the US attack on the Baghdadi International Airport, Tehran also said it was rolling back its commitments under the JCPOA.