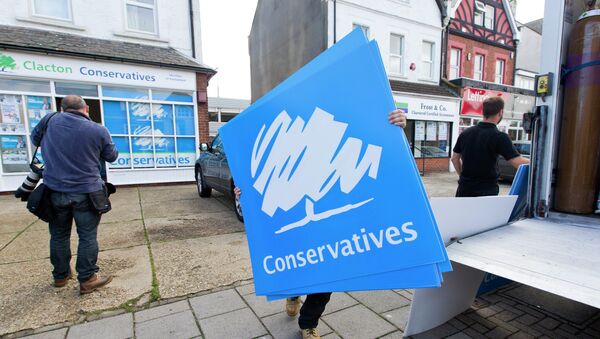 Lilia Dergacheva
All materialsWrite to the author
The Conservatives have held 365 seats, a margin of 80, in the House of Commons since they won a December snap vote, with Labour even losing in its traditional strongholds. In the wake of the leftist party’s terrible showing, leader Jeremy Corbyn noted he would not cross swords with anyone in a new party leadership vote.

The Tories are considering building another headquarters away from London following the party's election win in Britain’s North and Midlands, in a bid to better reflect its gains, according to sources cited by The Times. They pointed out that that string of new Tory MPs who smashed Labour’s “red wall” in constituencies in the region would be in need of greater support from London's key party staffers.

According to the Conservative Home website, “a senior source in No10” earlier requested the platform to welcome readers to share where they think the most appropriate location for the headquarters should be, and choose between the Midlands and England’s North.

The website quoted the source as saying at the time that a new base should be “somewhere reasonably close to a university with good maths/physics departments” as “we should  get a data team up there” as well as boast “good train links” and be “well placed in political terms".

The official also admitted the party may seek to reduce its office space in Westminster, setting up a small base “by King’s Cross” instead.

Beefed-up regional operations are expected to make it possible for the party to cut costs in the longer term, as during the election campaign, Johnson vowed to diminish the “opportunity gap” between different social layers by boosting the regions, acknowledging that the party would have to be transformed to better reflect the new heartlands where the Tories gritted out a win from Labour.

The latter, incidentally, also floated an idea of moving out from London: Labour leadership candidate Lisa Nandy similarly said she would prefer her party to leave its Southside premises in Westminster for a location in its lost heartland in an effort to reconnect with previously loyal voters.

Conservative Party membership shot up to 191,000 at the end of last year from 124,000 in early 2018, with Brexit universally named as the main driving force behind the statistics, along with Tories’ almost landslide win in the 12 December snap vote.

This was the moment that talks of a smooth EU exit and carefully worked-out post-Brexit trade plan were put back on track, as Boris Johnson reaffirmed himself as prime minister and secured an absolute majority in the country’s 650-member Parliament.