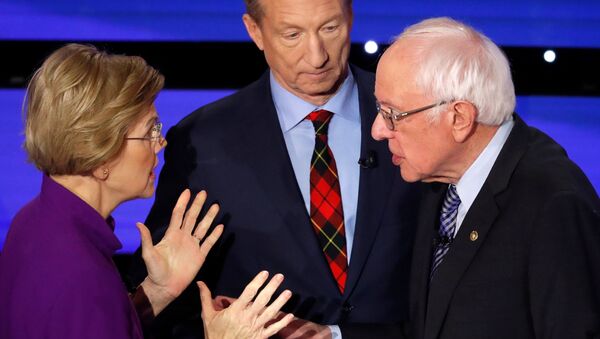 © REUTERS / SHANNON STAPLETON
Subscribe
The two Democratic Party presidential hopefuls, Vermont Senator Bernie Sanders and Massachusetts Senator Elizabeth Warren have begun to take fire at one another as the first states which will determine the Democratic nomination begin to draw near.

The content of the heated post-debate conversation between Democratic presidential candidates Senator Elizabeth Warren and Senator Bernie Sanders was revealed by a New York Times report on Wednesday.

According to the report, Warren told Sanders that she was concerned that he had mischaracterised their 2018 conversation during which, she alleges, the Vermont Senator said that a woman could not win the presidency.

Citing sources close to the exchange, the Times reported that Warren had expressed her concern about his denial of his alleged comments.

Sanders then asked Warren to discuss the issue another time, before turning away from the engagement.

CNN cameras caught Warren approaching Sanders following the 7th Democratic debate, as she rebuffed a handshake from the Vermont Senator before entering in a brief conversation with an air of tension, quickly ending with Sanders turning away from his fellow Democrat.

The interaction had been the subject of intense speculation following Sanders adamantly denying that he had told her that a woman could not win the presidency.

Warren and Sanders provide conflicting accounts of what was said during the December 2018 conversation.

During Tuesday night’s debate, after a moderator asked about the details of the conversation, Sanders denied the accusation.

“As a matter of fact, I didn’t say it,” Sanders said at the debate. "Anyone who knows me knows that it is incomprehensible that I do not think a woman could be president of the United States.”

The Vermont Senator highlighted how he had urged Senator Warren to run once before, and how he would help any Democratic nominee get elected to defeat Trump, regardless of their gender.

Warren disputed Sanders’s denial but gave the caveat that the two were "friends".

“I am not here to try to fight with Bernie”, she said. “But look, this question about whether or not a woman can be president has been raised and it’s time for us to attack it head-on".

The post-debate exchange comes as the two historically-aligned candidates begin to snipe over the progressive spotlight.

Reports emerged over the weekend alleging that the Sanders campaign had quietly told volunteers to portray Warren as a candidate of the elite while campaigning.

Sanders denied responsibility for the tactic, but on Sunday Warren responded, condemning the move.

“I was disappointed to hear that Bernie is sending his volunteers out to trash me", she said 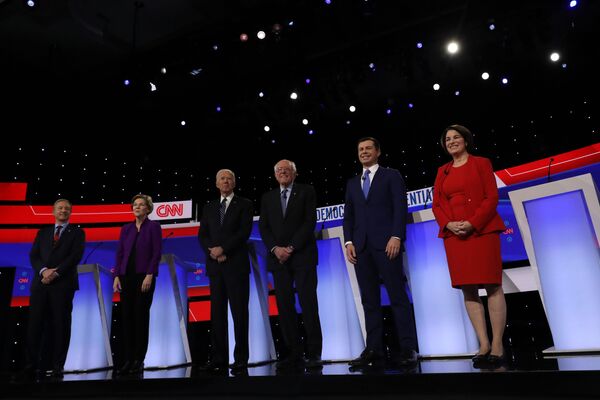 The rising tensions between the two candidates comes as Sanders, who has long held a steady second place, begins to creep up into first in the early states of the Democratic nomination vote.

Sanders and Warren have long been considered the two representatives of the newer more progressive wing of the Democratic party, which rose to prominence with the onset of the Sanders 2016.

In early debates, the two appeared to have an informal non-aggression pact, not attacking one another over issues of agreement such as medicare for all and tackling the influence of the wealthy having a disproportionate influence over the US political system.

000000
Popular comments
Warren is a certified liar. Whom do I believe? LOL