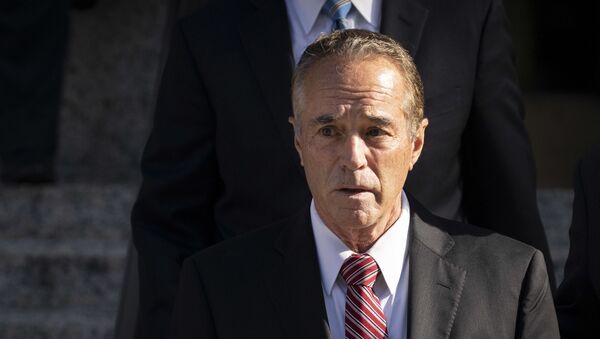 © AFP 2023 / Drew Angerer
Subscribe
International
India
Africa
WASHINGTON (Sputnik) - Federal prosecutors have recommended that former US Congressman Chris Collins should receive a sentence of up to four years in prison for his insider trading scheme and for lying to investigators, court documents showed on Monday.

"The applicable sentencing range for Congressman Collins under the United States Sentencing Guidelines ('Guidelines') is 46 to 57 months' imprisonment," the US Attorney for the Southern District of New York wrote in the court document. "The government believes that a sentence at the top end of the Guidelines range is necessary in order to satisfy the objectives of Title 18, United States Code, Section 3553(a), and in particular to promote respect for the law, to provide just punishment for the offense, and to achieve general deterrence."

In July 2017, the Office of Congressional Ethics (OCE) said in a report that there was substantial reason to believe Collins violated US federal law by sharing material nonpublic information related to his purchase of stock in Innate Immunotherapeutics, an Australian biotechnology company.

Collins served as the US representative for New York's 27th congressional district from 2013 to 2019.