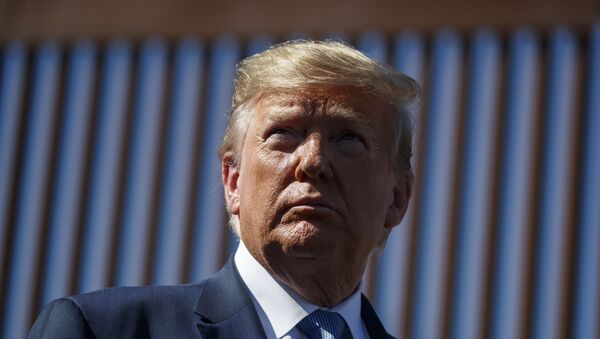 A White House spokesperson on Monday tried to explain Trump's retweet of a faked image with the Democratic leaders wearing Muslim garb, posed in front of an Iranian flag.

“I think the president is making clear that the Democrats are, have been parroting Iranian talking points and almost taking the side of terrorists and those who were out to kill the Americans", Grisham asserted, adding that "Democrats seem to hate [Trump] so much that they’re willing to be on the side of countries and leadership of countries who want to kill Americans".

The corrupted Dems trying their best to come to the Ayatollah's rescue.#NancyPelosiFakeNews pic.twitter.com/a0ksPHeXCy

The President of the United States is engaging in hate speech against an entire religion. And because he is President, it is in our name. It is on all of us - especially our elected officials- to demand that it stop. And to demand that @Twitter put an end to it. https://t.co/YU9nCCxBFm

​Jasmine El-Gamal, another Obama administration veteran, slammed the fake image in a series of tweets calling it "deeply damaging" to US Muslims and portraying sympathy to the inhabitants of a Muslim country as an insult.

The President of the United States retweeted a picture of Democratic leaders in a headscarf and turban, calling them corrupt and implying they are siding with "the Ayatollahs" demonstrating once again the vulnerability of Muslims in the US. This is a critical moment for us. 1/

The Council on American-Islamic Relations (CAIR) said in a statement that the tweet endangered Muslim Americans and was "childish, undignified and offensive."

"President Trump has repeatedly targeted Islam and Muslims with bigoted rhetoric and Islamophobic appointments and policies such as the Muslim Ban, which media reports say is soon to be extended to other nations", the organisation said.

Trump's highly-polarizing tweet follows a rise in tensions between the US and Iran after his administration authorized the assassination of top Iranian General Qasem Soleimani on 3 January.

Leading Democrats, including Senate Minority Leader Schumer and Speaker of the House Pelosi strongly criticised the killing as an escalation of conflict towards war, while many observed that the president was merely seeking to distract attention from his ongoing impeachment.

Those who support Trump accuse critics of the Soleimani assassination of siding with Iran.

000000
Popular comments
What the world has to realize is in Trump you dealing with an old man with the mind (if you can call it that) of at most a child of three years....maybe or maybe even a knat....if that.