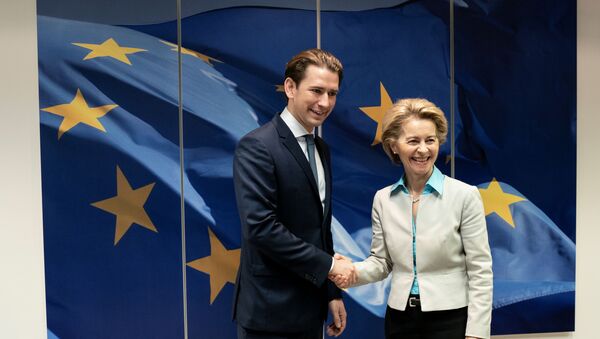 France has blocked the EU membership bids of Albania and North Macedonia until after the union makes sweeping changes to its accession rules, which France says are outdated and ineffective. The move has caused a split in Europe, although the European Commission does intend to Emmanuel Macron’s proposals later this month to assuage his objections.

Kurz, who was sworn in last week as Australia’s chancellor, spoke to reporters on Sunday as he visited Brussels at the invitation of European Commission chief Ursula von der Leyen.

As quoted by the Daily Express, the chancellor vowed to “put an end to the French veto” on North Macedonia joining the European Union.

He added: “We are grateful as a member state right in the centre of Europe.”

“We’ve always had a good linkage and contacts with Eastern Europe, and we’ve tried to do our share and to contribute to bridging the gap between the West and East in Europe, to establish closer bonds, and we would like to contribute to a strong and unified European Union.

“We’re a small member state, but, of course, we want to be a very active member state as well, and I look forward to your cooperation.”

What happened with Albania and North Macedonia?

This past October, France’s Emmanuel Macron led a small number of countries in blocking the start of formal EU accession talks for North Macedonia and Albania.

The two Balkan states applied for EU membership in 2004 and 2009, respectively, beginning a process that included the realignment of their economic policies, human rights, and laws with those of the EU.

Why did France say ‘no’ to their accession?

But France, alongside Denmark and the Netherlands, rejected their bids for the time being, citing a lack of progress in pre-accession talks. It said that the European Union must overhaul its enlargement process first so it could produce tangible results for the would-be member states.

France’s renewed approach aims to make that process more flexible to remove unnecessary pressure from the aspiring members of the union and also give them momentum (for instance, Albania’s High Court had to shut down in effect after the number of judges on it went down from 19 to 2 as a result of intense scrutiny and vetting).

Kurz recalled on Sunday that North Macedonia had done “great things” to move closer to the EU, referring to the change of name that ended a decades-long dispute with Greece.

The veto also prompted the resignation of North Macedonian Prime Minister Zoran Zaev, paving the way for a caretaker government to take over until fresh elections in April.

Ursula von der Leyen said on Friday at the launch of Croatia’s rotating presidency of the Council of the EU that the bloc has to “deliver and keep” its promises to both Balkan countries.

The European Commission is set to discuss changes to the enlargement process later this month before kick-starting the talks with Albania and North Macedonia. Croatias also vowed to move to unblock the process over the next four months.