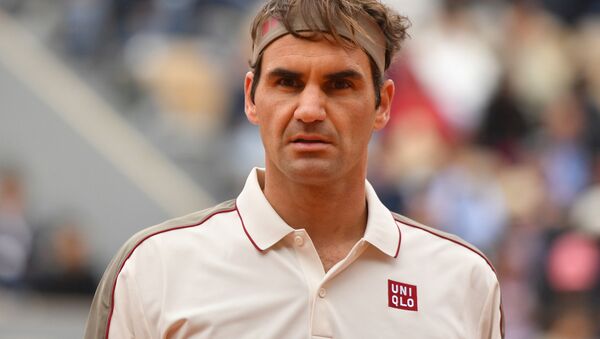 Lilia Dergacheva
All materialsWrite to the author
The world’s No. 3 player was taken aim at by climate activists back in late 2018, as they whacked tennis balls in protest against his use of Credit Suisse’s services. However, he apparently waited for the last straw - a swipe from Ms Thunberg.

Roger Federer ended up in teenage activist Greta Thunberg’s crosshairs over his sponsorship deal with the bank Credit Suisse, which has been found to have invested millions in fossil fuel, but promptly responded to the relentless environmentalist’s telling off.

Thunberg waded into the rift, by retweeting a post from 350.org, which said that Credit Suisse had provided US $57 billion to companies looking for new fossil fuel deposits, and asked Federer to “wake up now”, prompting arrays of diverse comments online:

ROGER FEDERER IN THE BLACK LIST OF THE GRETA THUNBERG PROBLEM!
The troubled environmental activist girl, Greta Thunberg, attacked Roger Federer for being the ambassador of the Swiss bank Credit Suisse, an entity that looks for oil fields.
What do you think of her? pic.twitter.com/LtJNlDkusl

'Wake up now': Greta Thunberg takes stunning swipe at Roger Federer https://t.co/zwnwSGDEfo Can someone tells Greta to stick with her school activity and have normal teenage grow up and not try became some one who she have no idea what she talking about , stick to school .

The proud owner of 20 Grand Slam titles retorted that he would hold talks with his sponsors at the Swiss bank, which he has had long-term business links with. In particular, he stressed that he is open to “innovative solutions” to climate change and debating “important issues” with Credit Suisse.

“I take the impacts and threat of climate change very seriously, particularly as my family and I arrive in Australia amid devastation from the bush fire”, Federer said in a statement, further expressing respect for the youth climate movement:

“I am grateful to young climate activists for pushing us all to examine our behaviours and act on innovative solutions”, Federer, ranked world No. 3 in men's singles tennis by the Association of Tennis Professionals, said.

Shortly before the comments, a dozen climate activists went on trial for crashing a Credit Suisse office in Lausanne, Switzerland and playing tennis there, thereby protesting against the bank’s support for fossil fuel extraction.

The activists were hitting tennis balls, alluding to Federer, and urged him to break his links with the financial institution, with the stunt meant to “stop people acting like nothing is happening”. “Credit Suisse is destroying the planet. Roger, do you support them?” their banners read.

In response, Credit Suisse said in a statement that it “is seeking to align its loan portfolios with the objectives of the Paris Agreement and has recently announced in the context of its global climate strategy that it will no longer invest in new coal-fired power plants”. Nevertheless, it added that regardless of its respect for freedom of expression, it cannot put up with illegal attacks on its offices.