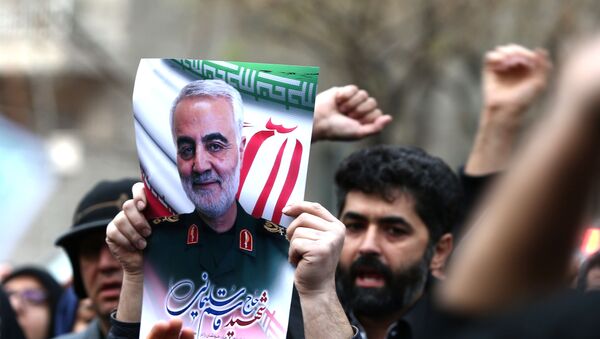 Soleimani, considered the second most powerful person in Iran’s leadership structure, was killed in a US drone strike in Baghdad on Thursday in the wake of attacks on the American embassy in Iraq. Abu Mahdi al-Muhandis, the deputy head of the Iran-backed Iraqi Popular Mobilization Forces (PMF), was also killed in the strike.

"This was not retaliation as claimed, but the pre-planned exploitation of a pretext to assassinate a foreign official designated as an enemy," Freeman said on Friday. "It was an act of war that will inevitably evoke reprisal."

President Donald Trump claims he ordered the strike because Soleimani and the militia chief had allegedly been plotting "imminent" attacks against US interests.

Freeman, who also served as US Assistant Secretary of Defence for International Security Affairs, said there is no concrete evidence to corroborate Trump’s claims or justify preemptive action.

"The charge that these two were planning attacks on American soldiers and officials could equally well be leveled at US Secretary of Defense Mark Esper, Secretary of State Mike Pompeo, White House officials, and US military commanders at all echelons," he said.

Freeman called the attack an "extrajudicial execution" and further departure from the rule of law in the United States.

The former diplomat observed how the escalation began Sunday with suspicious US strikes against Iranian-backed militia groups in Iraq, which sparked the attacks against the embassy in Baghdad.

"[Soleimani’s death] was preceded by three airstrikes on elements of Kataeb Hezbollah for the death of a civilian contractor in Kirkuk. None of these [US] airstrikes was anywhere near Kirkuk," Freeman said. "They bore the marks of a pre-planned operation looking for a pretext to launch."

"Soleimani was the equivalent of the US national security adviser or the commanders of CENTCOM, SOCOM, and SOCCENT. All are now potential Iranian targets," Freeman warned.

Meanwhile, Kataeb Hezbollah is likely to be joined in its campaign against US forces and officials in Iraq by other patriotic militias including some historically hostile to Iran, the former envoy added.

Although likely a welcome distraction to the impeachment proceedings, in foreign policy terms Trump’s decision "makes no sense at all," he said.

"It is not a deterrent to Iran so much as a provocation. It pushes Iraq further into the arms of Iran and invites the humiliating expulsion of US forces from Iraq. It makes every American in Iraq a target for murder or hostage taking," Freeman said.

Trump’s "strategy-free" decision is tantamount to beginning a game of chess with only an opening move in mind, he said.

"It is thus a reminder to the word of the witless hubris and violence with which the United States now conducts its international relations," Freeman concluded.

000000
Popular comments
Trump says Soleimani was "caught in the act." Soleimani was driving in an obvious two black SUV caravan. He just arrived to Baghdad international airport from Damascus. Soleimani was most likely on a official visit to meet Iraqi leaders after an invitation. The only thing the US caught in the act was an easy opportunity to quickly assassinate Soleimani. Soleimani was out in the open after he was invited to Iraq.