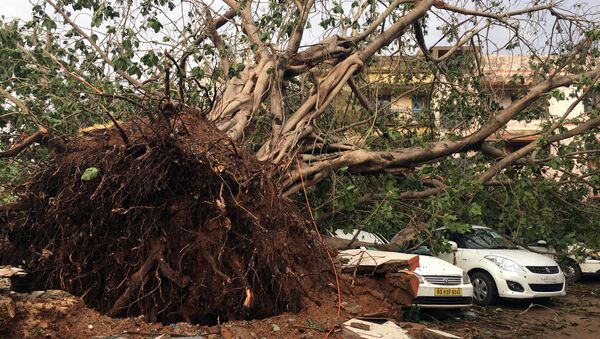 © REUTERS / Jatindra Dash
Subscribe
At least 15 “destructive weather events” caused by climate change took place over the last year, causing more than $1 billion worth of damage each, according to a report released this month by relief and development agency Christian Aid.

“Extreme weather, fuelled by climate change, struck every corner of the globe in 2019. From Southern Africa to North America and from Australia and Asia to Europe, floods, storms and fires brought chaos and destruction,” the report’s executive summary states, referencing several disastrous events, including floods in northern India, China and the Midwest and Southern US; Typhoon Lekima in China; Typhoon Hagibis in Japan; Hurricane Dorian in the US; the California wildfires; and Cyclones Idai and Fani in Southern Africa and India, respectively.

“These figures are likely to be underestimates as they often show only insured losses and do not always take into account other financial costs, such as lost productivity and uninsured losses,” the report adds, noting that four of the 15 climate disasters cost at least $10 billion.

The report also adds that an “overwhelming majority” of climate-related deaths in the past year were caused by Cyclones Idai and Fani, which claimed the lives of at least 1,300 people and at least 89 others, respectively. Cyclones are quickly rotating storm systems with low-pressure centers.

“The overwhelming majority of the deaths were caused by just two events, in India and southern Africa - a reflection of how the world’s poorest people pay the heaviest price for the consequences of climate change,” the report explains.

In addition, the report notes that the global average temperature in 2019 was around 1 degree Celsius hotter than in pre-industrial times, warning that global temperatures will continue to rise by around 0.5 degrees Celsius over the next 20 years and by 2 to 3 degrees by the end of the century.

The report’s executive summary ends on a somber note, warning that global weather will continue to become “ever-more extreme” and that “people around the world will continue to pay the price.”

The past decade is set to be the hottest experienced in recorded history, according to a report published earlier this month by the United Nations’ World Meteorological Organization.

According to the report, the concentration of carbon dioxide in the atmosphere reached a record high in 2018 of 407.8 parts per million and increased further in 2019. Melting ice sheets in Greenland and Antarctica, specifically, have also greatly contributed to the accelerating sea level rise. Sea water is also 26% more acidic than at the beginning of the industrial age due to the oceans absorbing more carbon dioxide, and marine heat waves, defined as periods of extremely warm sea surface temperatures, have become more prevalent.

A study published last month by an international team of scientists in the Proceedings of the National Academy of Sciences also found that even if the countries that are part of the Paris Agreement hit their 2030 emissions targets, sea levels could still rise by about 3 feet by the year 2300.