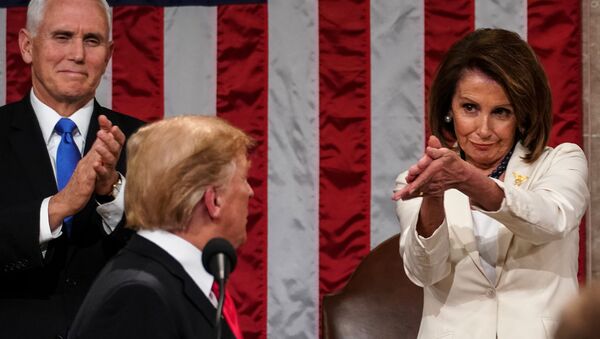 Ekaterina Blinova
All materialsWrite to the author
By impeaching Donald Trump, the Democrats inflamed the Republican base and irritated independents, which may boost the president's chances in the 2020 race, says Wall Street analyst Charles Ortel, explaining why House Speaker Nancy Pelosi's apparent attempts to dictate the rules of the game to the Senate are futile.

Although the House has impeached Donald Trump for abuse of power and obstruction of Congress, the fight is not over yet for Speaker Nancy Pelosi who has crossed swords with Senate Majority leader Mitch McConnell over the terms of the trial of President Donald Trump.

Earlier, the House speaker refused to immediately transmit the articles of impeachment to the Senate expressing doubt that the trial would be fair: "The House cannot choose our impeachment managers until we know what sort of trial the Senate will conduct", she tweeted on 23 December.

The House cannot choose our impeachment managers until we know what sort of trial the Senate will conduct.

President Trump blocked his own witnesses and documents from the House, and from the American people, on phony complaints about the House process. What is his excuse now?

​According to McConnell, Pelosi's move is "absurd": “She apparently believes she can tell us how to run the trial,” he told Fox and Friends on Monday.

These articles of impeachment are so weak that before they even passed, the Senate Democratic Leader began demanding that the Senate re-do the House’s homework. Now the Speaker is hemming and hawing about whether they'll even proceed to trial.

​'The Senate Shall Have the Sole Power to Try All Impeachments'

While the US Constitution does not stipulate when exactly Pelosi has to send the articles of impeachment, one cannot effectively argue with the fact that the Senate is the sole arbiter of the rules in an impeachment trial", says Wall Street analyst and investigative journalist Charles Ortel, citing the plain language in Article I, Section 3 of the US Constitution and noting the Supreme Court decision in Judge Nixon v United States 506 224 (1993).

In light of this, the House Speaker's attempts to dictate her own rules to the Senate and sow discord are meaningless, the analyst remarks.

According to Ortel, "the process by which the articles of impeachment emerged was certainly a partisan one" and "it seems like an attack by Democrat partisans who are upset with this administration's policies".

The analyst warns that "if this precedent is allowed to stand, the House of Representatives, will likely be used forever after, to hound a president and distract the president from performing his or her duties".

However, there's more to the impeachment process than meets the eye. Referring to the Nixon v United States case, American journalist and blogger Ren Jander highlighted on Sunday, that in 1993 the United States Supreme Court "unequivocally ruled that no trial is required for the Senate to acquit, or convict, anyone impeached by the House of Representatives".

Jander opines that given the aforementioned Senate's power the upper chamber of the US Congress can acquit President Trump without any trial, even if Pelosi continues to withhold the articles of impeachment. The journalist added that for its part "the Supreme Court has no authority, whatsoever, to review the Senate's acquittal".

On the other hand, if the Senate kicks off a trial, "one of the first things that Senators will have to consider is whether the articles of impeachment actually describe 'impeachable offences'", Ortel presumes.

"Senators, many of whom are experienced and highly regarded lawyers, will have to decide whether the Articles of Impeachment voted on in the House of Representatives, actually rise to the level of 'treason, bribery, or other high crimes and misdemeanours'. To do so, they will likely first consider whether 'abuse of power' and 'obstruction of Congress' are, in fact, crimes", he underscores.

One might wonder as to how the impeachment process may affect the ongoing 2019-2020 election cycle and if there is any probability that the Senate will turn its back on the president.

"At this moment, should a trial proceed in the US Senate, there is an infinitesimally small probability that 67 Senators will vote to remove President Trump on either article of impeachment", Ortel says.

According to the investigative journalist, one big question is whether the articles of impeachment will be dismissed. If they are not dismissed, a second big question is "how long various legal challenges may take to get resolved through our court system".

"I see little likelihood that a conviction will occur at any time, let alone so rapidly as in early January 2020", the analyst emphasises. "If the Senate trial proceeds, it is likely that deliberations will be extended, possibly into the primary season and then disturb plans of Senators Cooker, Klobuchar, and Warren, should these candidates remain in the race to challenge President Trump for re-election".

What the Democrats have really done by impeaching Trump is "inflame the Republican base and enervate Independents who are unhappy with the glacial pace of positive change in government", Ortel believes.

"With each loopy pronouncement of Democrats regarding impeachment, President Trump will have more fodder to raise campaign contributions and more arguments to bring voters out to the polls in what promises to be the wave election of 2020", he says.

The day Trump was impeached, his re-election campaign raised $5 million in donations. At the same time, according to Federal Election Commission data, the Republican National Committee broke its record in November, gaining $20.6 million.

Meanwhile, Trump's approval rating reached 49 per cent on Monday, according to a Hill-HarrisX poll. Earlier, on 18 December, two separate polls by Gallup and Reuters/Ipsos indicated a 45-per cent approval of for President Trump.