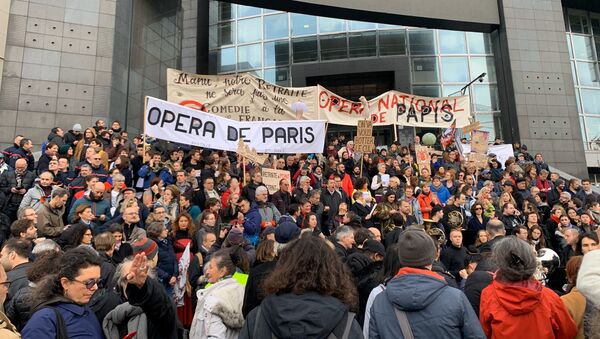 On 5 December more than 30 unions kicked off strike actions in order to force President Emmanuel Macron to reconsider his pension reform plans. The Paris Opera singers and dancers took to the streets on 17 December to denounce the government's intention to end their special pension regimes.

Nationwide strikes have engulfed France since 5 December in response to French President Emmanuel Macron's controversial pension reform which envisages the implementation of a single points-based system with a mandatory minimum retirement age of 62 instead of 42 separate schemes that provided early retirement for many public-sector workers.

In the long list of those protesting against Macron's pension reform the less talked about are singers and dancers of the Paris Opera. However, they are the ones who are hurt the most as ballet dancers have long been allowed to retire at 42 while technical staff could leave with a full pension at 50.

On December 17 they walked into the Place de la Bastille to join the other strikers. During the afternoon, one could hear "Le Chant des partisans" (Song of the partisans) – the anthem of the French Resistance – and "Marseillaise" being performed by the artists in order to denounce the end of their special regime.

"This special regime was specifically designed for us. In addition it is entailing no deficit, so it costs nothing to the state", explains a Paris Opera choir artist. "This mode takes into account the fact that we study for many years, return home late from work and, like the dancers, use our body as a working tool. This explains the fact that after 40 it’s hard to keep working".

Since the beginning of the strikes on 5 December, some 15 opera and ballet performances were cancelled at Opera Bastille and Palais Garnier which represents a loss of €2.5 million in ticket revenue.

The striking artists mostly regret the performances canceled in December, but they explain that they joined the protests because they have no choice, for themselves and for the next generations.

"I have a child, I have responsibilities, but I'm still there. Leaving at 42 with nothing is just not possible. It is very sad not to work, but we are on strike because for us it is a strong blow", says a Paris Opera dancer.

However, the greatest source of concern for these strikers is the very future of their profession, which risks losing quality in the terms of skills. Opera and ballet remain one of the crucial components of the cultural heritage of France.

"We are worried about everyone's fate. If we want to maintain the leading positions of the Paris Opera we need to preserve certain specificities of our regime. Currently, it is working very well but what the government is proposing is going to sink the Paris Opera", says one of the strikers.

The Paris Opera сhoir rarely goes on strike: it took to the streets "for the first time in 19 years." The Paris Opera and the Comédie Française are the two only cultural institutions affected by Macron's pension reform. The special pension regime of the Paris Opera is one of the oldest in France: it was introduced in 1698 under Louis XIV.