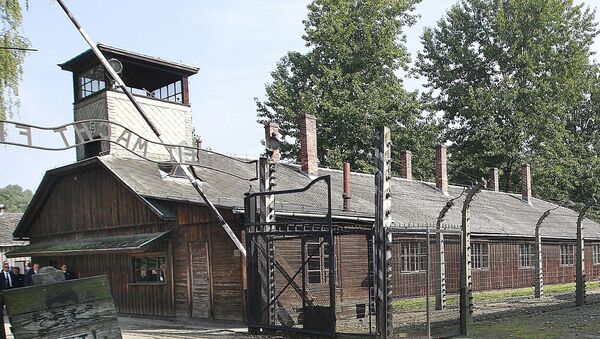 Tim Korso
All materialsWrite to the author
Earlier, the head of the British Conservative party, Prime Minister Boris Johnson, secured a convincing victory for his party in the 12 December snap general election. His party made a strong emphasis on finalising the UK's long-overdue exit from the European Union.

A cartoon, drawn and published by Italian artist Mario Improta in the wake of Johnson's party victory in general election in the UK, sparked controversy over its use of Nazi symbolism to deliver the message that London will complete Brexit and be satisfied with the result.

In the image, Improta shows a joyful Johnson holding the UK flag and running away from what looks like - judging by the distinctive arc above the entrance - the notorious Auschwitz concentration camp run by the Nazis in World War II. The problem is that, instead of the infamous caption above the entrance "Arbeit macht frei" ("Work sets you free"), Improta wrote "European Union", suggesting that with Johnson's victory, the UK will soon be able to escape the EU.

While many netizens liked Improta's interpretation, Rome’s Jewish community, the Auschwitz Memorial, has condemned the use of Nazi symbolism, calling it "painful for the memory of Auschwitz and its victims".

Following a backlash, the artist admitted that it was not correct to use Auschwitz to represent the EU, and published an edited version of the cartoon in which the economic bloc is depicted as a yellow-blue toilet with Johnson joyfully escaping it.

Johnson's Conservative Party achieved a major victory in the 12 December UK snap election, securing 359 seats in the 650-seats-large House of Commons and thus a majority crucial for the Prime Minister's plans to finish Brexit by 31 January 2020.

000000
Popular comments
Everything about the Jews is totally sacred. Even God is less sacred than the Jews and their holocaust !
Albert44
17 December 2019, 22:54 GMT4
000000
The first cartoon was accurate and most people would have liked it. The fact that a few Jews didn't like it, is unimportant.
Brit26
17 December 2019, 23:53 GMT1
000000
Newsfeed
0
New firstOld first
loader
LIVE
Заголовок открываемого материала
Access to the chat has been blocked for violating the rules . You will be able to participate again through:∞. If you do not agree with the blocking, please use the feedback form
The discussion is closed. You can participate in the discussion within 24 hours after the publication of the article.
To participate in the discussion
log in or register
loader
Chats
Заголовок открываемого материала
Worldwide
InternationalEnglishEnglishMundoEspañolSpanish
Europe
DeutschlandDeutschGermanFranceFrançaisFrenchΕλλάδαΕλληνικάGreekItaliaItalianoItalianČeská republikaČeštinaCzechPolskaPolskiPolishСрбиjаСрпскиSerbianLatvijaLatviešuLatvianLietuvaLietuviųLithuanianMoldovaMoldoveneascăMoldavianБеларусьБеларускiBelarusian
Transcaucasia
ԱրմենիաՀայերենArmenianАҧсныАҧсышәалаAbkhazХуссар ИрыстонИронауОssetianსაქართველოქართულიGeorgianAzərbaycanАzərbaycancaAzerbaijani
Middle East
Sputnik عربيArabicArabicTürkiyeTürkçeTurkishSputnik ایرانPersianPersianSputnik افغانستانDariDari
Central Asia
ҚазақстанҚазақ тіліKazakhКыргызстанКыргызчаKyrgyzOʻzbekistonЎзбекчаUzbekТоҷикистонТоҷикӣTajik
East & Southeast Asia
Việt NamTiếng ViệtVietnamese日本日本語Japanese俄罗斯卫星通讯社中文（简体）Chinese (simplified)俄罗斯卫星通讯社中文（繁体）Chinese (traditional)
South America
BrasilPortuguêsPortuguese
NewsfeedBreaking
11:43 GMT'F**k Them': Carlson Responds to Yet Another Call to Fire Him Over 'Great Replacement' Theory
11:42 GMT'Piece of Scum': UK Labour Deputy Leader Lashes Out at Tories
11:14 GMTUK Transport Minister Calls on Britons to Behave Normally, Says There is No Shortage of Fuel
11:12 GMTHamas Has No Place in Sudan But Will It Give Up on Former 'Base'?
11:05 GMTJapan Should Look Into Having Nuclear Submarines, Candidate for Ruling Party Head Says
11:05 GMTIsraeli Soldiers Shoot Down Nazi Flag Raised Near Outpost in West Bank - Photo, Video
10:52 GMTTaiwan Strait Situation 'Complex and Grim', Xi Jinping Says as He Calls for 'National Reunification'
10:46 GMTHillary Clinton Urges to Call Her 'Madam Chancellor', But Netizens Come Up With Other Names
10:39 GMTGerman Green Party Might Find Some 'Rare Lizards' to Stop Nord Stream 2, AfD Co-Chair Warns
10:35 GMTWorld War II Bomb Suspends Elections at Several Polling Stations in Wuppertal, Germany
09:47 GMTTunisian Lawmaker Says Ennahda Party's Rigidity Led to Mass Resignation of Members
09:41 GMTCanary Island Volcano Continues to Erupt, Forcing More People to Evacuate
09:41 GMTChina Sells Almost $65Mln Worth of Carbon Dioxide Emission Quotas, Environment Ministry Says
09:28 GMTIRGC Commander Says 'US Hand-Made Armies' Failed to Tackle Terrorists in Afghanistan, Iraq
09:21 GMTKate’s 'Coolness' and William’s 'Bullying' Led to Rift With Harry and Meghan, Book Claims
08:21 GMTIndia’s Main Opposition Party Takes a Dig at Grand Celebration on PM Modi’s Return From US
08:11 GMTPolling Places Open for Parliamentary Elections in Germany
08:00 GMTEximbank Will Support Russian Exports to Croatia
07:45 GMTUS Treasury Could Run Out of Cash by Mid-October, Think Tank Warns as Government Shutdown Looms
07:31 GMTGloves Off: Prince Andrew Takes New Legal Strategy, Aims to Fight Sex Abuse Allegations, Media Says