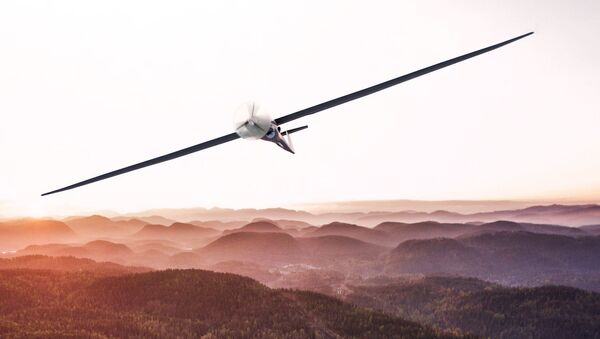 A new “high performance” spy drone, dubbed the Ultra Long Endurance Aircraft Platform (Ultra LEAP), was recently tested at the US Air Force’s Edwards Air Force Base in California. Adapted from commercially available parts, the Ultra LEAP stayed aloft for two-and-a-half days without refueling, longer than most of the Pentagon’s spy drone fleet.

Last week, the USAF tested its newest long-range spy drone, Ultra LEAP, which it describes as "a high-performance, cost-effective, sport-class commercial airframe,” according to a Sunday press release.

The unmanned aerial vehicle flew for more than two days without refueling, from December 9 through 11 - significantly longer than the previous record, a 34.3-hour flight by an RQ-4 Global Hawk, according to Military.com.

The longest-flying drones, dubbed “atmospheric satellites,” are experimental craft that have stayed aloft for much longer: four days for Boeing’s Phantom Eye and an incredible, 14-day flight by Airbus’ Zephyr in 2010.

“Developing a UAS [unmanned aircraft system] with this level of endurance is an incredible achievement for future warfighting and battlefield success,” said Paul Litke, the lead project engineer at the Air Force Research Laboratory's Center for Rapid Innovation (CRI), which developed the drone, according to the service’s release.

CRI Director Alok Das said the debut flight was “a significant milestone in solving the tyranny of distance problem for ISR [intelligence, surveillance, reconnaissance] systems. It will provide immediate benefit to our warfighters while at the same time paving the path for future low-cost, multi-day endurance ISR systems.”

The release notes that Ultra LEAP is based on off-the-shelf commercial airframe parts and is capable of taking off, flying and landing autonomously. It also carries with it “secure, easy to use navigation employing anti-jam GPS and full global operational access via a satellite-based command and control and high-rate ISR data relay link.”

The press release is otherwise sparse on the details, including the wingspan, weight, maximum altitude and speed of the unmanned aerial vehicle.

Breaking Defense noted that comparable “sport-class” commercial airframes can cost anywhere between $20,000 and $140,000 each; however, the outlet couldn’t confirm the name of the company that provided CRI with the Ultra LEAP’s chassis “for security reasons.”

That’s a big cost-saver compared to the 20-year-old Global Hawk, which can run more than $200 million per aircraft.

"This way, the US military will save money without sacrificing reliability and maintainability," Litke said.

Adapting civilian tech for military use is nothing new, of course, but with military hardware becoming ever more complex, expensive and time-consuming to develop, militaries are looking for new ways to modify commercial tech for their own purposes.

In October, Norwegian defense firms Kongsberg and Salt Ship Design announced a modular “plug and play” ship capable of filling either military or civilian needs, Sputnik reported. The “Vanguard” is purported to halve the cost of patrol vessels.

“The baseline warship fitted with Kongsberg systems and sensors is substantially cheaper than other warships,” Frank Tveiten, Kongsberg’s vice president of naval integrated defense systems, told Defense News at the time. “It’s going to rock the market a little bit.”

Military.com also noted the Air Force is attempting to lessen the prohibitive cost of spy drones, pushing the development of the XQ-58A Valkyrie, a “loyal wingman” drone designed to accompany F-35 and F-22 pilots into battle, which maker Kratos predicts will cost between $2 and $3 million per UAV.