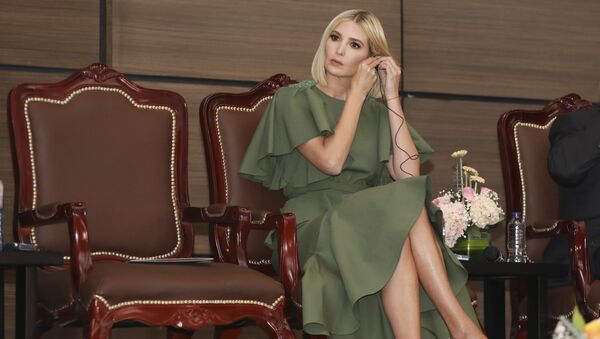 © Fernando Vergara
Subscribe
Lilia Dergacheva
All materialsWrite to the author
The First Daughter’s visit to Al-Udeid Air Base comes on the sidelines of the Doha Forum that took place in the Qatari capital over the weekend. Ivanka instantly hit the headlines when she managed to get off easy, answering light and hugely prompting questions from a White House PR staffer.

Ivanka Trump has again ended up in netizens’ crosshairs after posting about her recent visit to Al-Udeid Air Base, southwest of Doha, Qatar – America's biggest military base in the Middle East.

It was an honor to visit Al-Udeid Air Base, the largest U.S. military installation in the Middle East, to thank the brave men and women who keep America safe.
Aim High, Fly-Fight-Win! God bless you and Merry Christmas! pic.twitter.com/Cg1rYaVGPz

“It was an honour […] to thank the brave men and women who keep America safe", Ivanka went on in the caption to a series of pictures of her posing with the personnel of the air base, which houses the Qatar Air Force, United States Air Force, Royal Air Force, and other Gulf War Coalition personnel. She rounded off by cheering on the military stationed in Doha and wishing them happy holidays.

“Madam President", one quipped, with another explaining:

“This is what I believe Ivanka is preparing herself for gaining knowledge and meeting people around the globe to run for President 2024".

Many others followed suit, bringing up the fact that Ivanka was not qualified for her White House job, which she took on after her father was inaugurated in 2017.

Some even brought up former intel agent and author of the controversial dossier Cristopher Steele, who was reported last week to have been on friendly terms with Ivanka:

Was Christopher Steele with you by chance?

..whereas a number of Ivanka’s subscribers blasted the tweet with pictures as a yet another photo op ripping her “perpetual PR tour” while on trips financed by taxpayers:

How much did the taxpayers waste to send "Billionaire Barbie" on a weekend getaway? Just curious. Her life is probably so rough in DC.

You are unelected, and unqualified for your office. Your father is a danger to world affairs; your perpetual PR tour will never clear your name.

Daughter/Wife enjoying the perks of taxpayer money around the world.

Some picked up on Ivanka’s choice of outfit suggesting she faked the camouflage:

The other day, Ivanka was no less harshly criticised over her softball interview during the Doha Economic Forum, where she was posed just a number of light questions by a State Department spokeswoman, rather than grilled by news reporters, contrary to other high-ranking officials visiting the annual event.