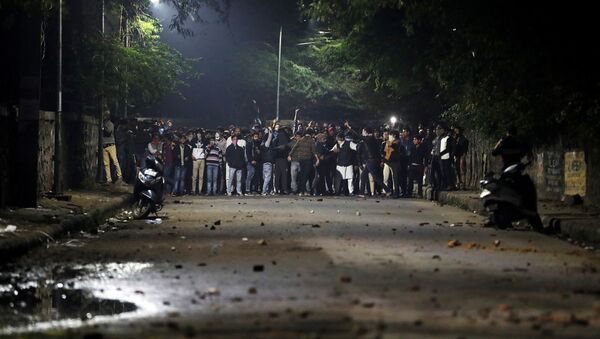 New Delhi (Sputnik): The Citizenship Amendment Act (CAA) protests started in India’s northeastern states (mainly Assam and Tripura) last week. They have now spread to various regions of the country including Lucknow, Bengaluru, and Kolkata, claiming at least six lives, and responsible for injuries to over 100 activists and 35 policemen.

Amid numerous videos which have surfaced indicating violence towards students at Delhi's Jamia Millia Islamia University, police have rubbished the allegations. The ruling party, the BJP, however, has pinned the blame on the opposition parties, saying it's their ploy to create differences between Hindus and Muslims.

Speaking of the Delhi Police entering Jamia College premises, police officials have accused the protestors of provoking officers and causing them to resort to baton charges and the use of tear gas to disperse them, after students started hurling stones and torching public transport. 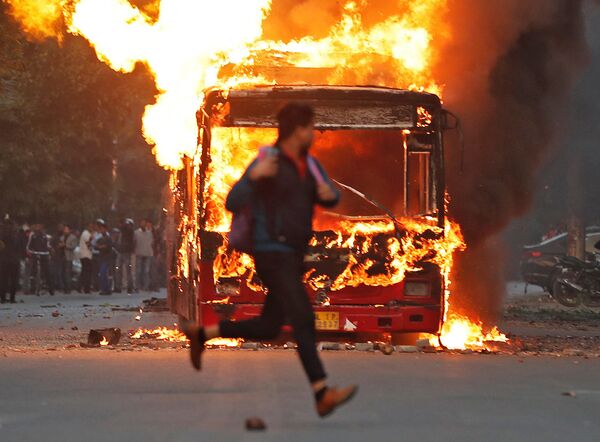 A man runs past a burning bus that was set on fire by demonstrators during a protest against a new citizenship law, in New Delhi, India, December 15, 2019
© REUTERS / Adnan Abidi

According to a senior police officer near the area where the Jamia University is located, it's the responsibility of college authorities to ensure that their students' protests remain peaceful.

Chinmoy Biswal, the Deputy Commissioner of Police (DCP), South-East Delhi, said: "I have a question for Jamia University administration: When students come out on roads to protest, do they wear ID cards?"

"When we saw a crowd comprising 1,000-1,500 people, getting violent, we did not have any means to ensure whether they were locals or students. This is the job of the college administration and authorities to ensure that the protest remains peaceful," the police officer added. 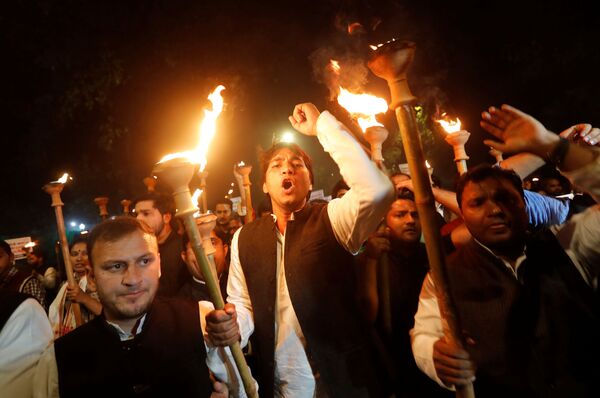 Members of the youth wing of India's main opposition Congress party shout slogans during a protest against the Citizenship Amendment Bill, a bill that seeks to give citizenship to religious minorities persecuted in neighbouring Muslim countries, in New Delhi, India December 11, 2019
© REUTERS / ADNAN ABIDI

University Students from Across India Up in Arms Against New Citizenship Law - Videos
The purported videos of police firing and even leaving students injured in the university's washroom have been doing the rounds on social media. According to reports, nearly 60 people, including students, police officers and fire-fighters, were injured in the protests.

"We do not have any hard feelings for Jamia students, but took the minimum action required to contain the violence when a mob started pelting stones at us," the officer added.

Students of Jamia University, the majority of them Muslims, have been protesting against the new act claiming it's against the secular values of the Indian constitution. 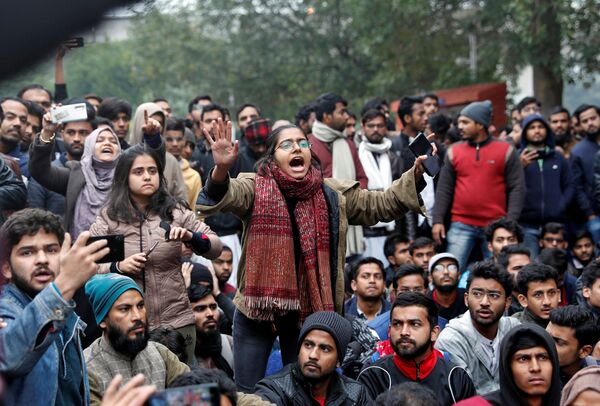 A student of the Jamia Millia Islamia university reacts during a demonstration after police entered the university campus on the previous day, following a protest against a new citizenship law, in New Delhi, India, December 16, 2019
© REUTERS / ADNAN ABIDI

Meanwhile, Priyanka Gandhi, a politician of India's main opposition Congress Party, also supported Jamia students and spoke out against police action targeting students on Sunday. She joined the protest on Monday by staging a sit-in near India Gate.

India's ruling Bharatiya Janata Party (BJP), however, accused the opposition parties of fueling the violent protests and called the incident a conspiracy by the Congress Party.

"Now, with Priyanka Gandhi's participation in a similar movement, it is an extension of the previous one, where we can see her unsuccessfully taking part in vote bank politics based on religion," Patra said.

"The BJP condemns this type of politics that tries to create differences among Hindus and Muslims in the country," he added.

Meanwhile, BJP politician Vijay Sonkar Shastri said rumours are being spread that there is a connection between the National Register of Citizens' (NRC) – Supreme Court-monitored exercise to identify genuine citizens in the country – and the Citizenship Amendment Act, which seeks to grant citizenship to non-Muslim persecuted minorities from neighbouring countries.

"The CAA has nothing to do with the citizen of the country. It is about granting citizenship to persecuted immigrants who live in India. While the NRC is to deal with the deportation of illegal immigrants in the country," Shashtri said.

The Citizenship Amendment Act, recently passed by the Indian Parliament, has been challenged in India's top court. P.V. Abdul Wahab, Member of Parliament who filed the petition said: "We demand that there be no exclusion of any particular community in the new act, or that it be completely scrapped."

"This is the open agenda of the Rashtriya Swayamsevak Sangh (BJP's parent organisation) for the creation of a Hindu Rashtra (a Hindu nation)," he added.

The petition is scheduled to be heard in the Supreme Court on Wednesday 18 December.