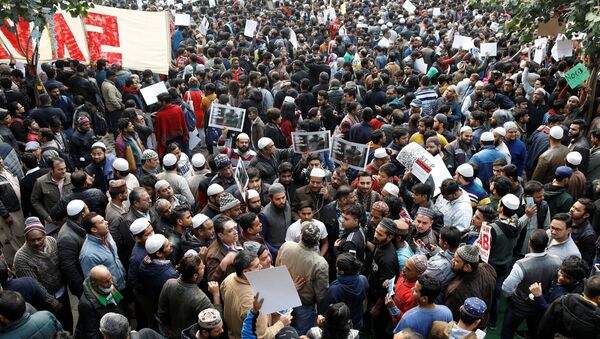 New Delhi (Sputnik): Agitation over India’s new citizenship law is spreading like wildfire across the country. The protests, initially confined to the country’s north-eastern region, have spread to other places and on Sunday, a premier university in the national capital was turned into a battleground between agitating students and policemen.

Students of coveted universities in various parts of India have hit the streets to express their solidarity with Delhi’s Jamia Millia Islamia, which had an ugly face-off with the police on Sunday, leaving nearly 60 people – including students, police, and activists – injured.

The clashes left four public transport buses burnt to ashes and several damaged, with police alleged to have entered its campus.

As the news about the police action on students of Delhi’s Jamia Millia Islamia spread, students of several universities across India hit the streets in solidarity and in protest against the Citizenship (Amendment) Act that will grants citizenship to illegal immigrants from six religious minorities, excluding Muslims.

Over 200 students and police forces stood face to face at the university gate, with students pelting stones on police from the campus. The students of Darul Uloom Nadwatul Ulma (Nawda College) have been leading a fierce protest against the new citizenship law since Sunday.

Students from Aligarh Muslim University (AMU) in northern Uttar Pradesh were the first to come out in support of their counterparts in Delhi’s Jamia Millia Islamia and protested against the citizenship law.

Internet services were cut in the area after the protest turned violent and students clashed with police, leaving several of them injured. Police had to lob tear gas shells and charge with batons to disperse them.

An FIR has been registered against more than 500 students of the Aligarh Muslim University in connection with their protest against the Citizenship Amendment Bill, and security has been beefed up on the campus. #IndianJourneyToEndia pic.twitter.com/sveSuR07Dy

Students of the premier Jawaharlal Nehru University (JNU) in the national capital called for an all-night-long protest on Sunday outside the Police Headquarters in central Delhi against alleged highhandedness by law enforcement on students of Jamia Millia Islamia.

The protest was joined by students of other universities in Delhi and political activists.

Now, police action at Delhi University. I was also held by the collar by a police personnel for recording a video. @TheQuint pic.twitter.com/MXP9Oz5Lx7

Students of the Indian Institute of Technology in western Mumbai and southern Chennai – two top engineering universities – also protested in solidarity with their counterparts at Jamia Millia Islamia.

Protest inside @iitmadras. A foreign student joins the protest and tells why he did so.. pic.twitter.com/9giEKDeEV8

#Hyderabad - Protests at the Moulana Azad National Urdu University(MANUU) in Hyderabad against the violence at #JamiaMilia University. MANUU students express solidarity and stand in support for the students at #Jamia . #AligarhMuslimUniversity pic.twitter.com/IH5RREZW0B

Students of Banaras Hindu University in Varanasi also took to the streets expressing solidarity with their counterparts at Jamia Millia and Aligarh Muslim University.

Students of Puducherry University in the federally administered southern territory of Puducherry hit the roads, raising “Azadi” (freedom) slogans in solidarity with their counterparts in New Delhi and Aligarh, expressing their anguish over Delhi Police’s crackdown.

PU in solidarity with Students of JMI & AMU -If you won’t speak now then when, if you follow the ideals we laid the foundation of this great country upon, time to speak up now else it will too late. Students are our future#StudentsUnityZindabad#BoycottYourClasses#PUonStreet pic.twitter.com/dGe21GMzkr

Violent scenes were also witnessed near Patna University when a demonstration against the citizenship law turned violent and the mob torched vehicles.

From Patna. It was followed by a violent crackdown. It was the third protest since yesterday, and everytime, the protesters were attacked by the police.

RT because our voices are not reaching out.

The Citizenship (Amendment) Act enacted last week grants citizenship to illegal immigrants from six religious minorities – Hindus, Parsis, Jains, Christians, Buddhists, and Sikhs – but not Muslims – from Afghanistan, Bangladesh, and Pakistan, if they arrived in India prior to 2015.

Meanwhile, some top lawyers of the Supreme Court of India wanted the apex body to take action against police for its alleged violence against students of Jamia Millia University on Sunday evening. The court however, wanted the “rioting” to stop before it considers the issue.

"Just because they happen to be students, it doesn't mean they can take law and order in their hands, this has to be decided when things cool down. This is not the frame of mind when we can decide anything. Let the rioting stop", said a bench headed by Chief Justice Bobde.

The court agreed to consider the case on Tuesday, 17 December.