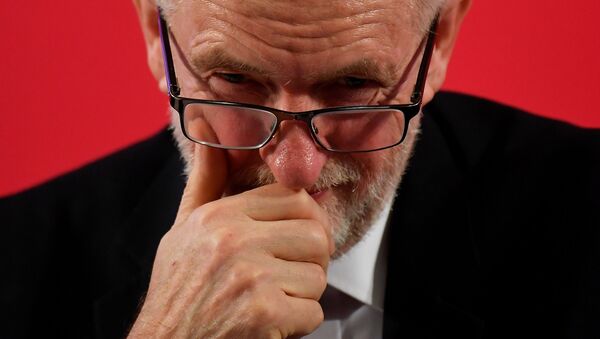 © REUTERS / TOBY MELVILLE
Subscribe
International
India
Africa
Labour has shown its worst election result since the 1930s, with a heavy defeat at the hands of Boris Johnson’s Conservative Party. Labour supporters on social media are at loggerheads about who is to blame for the poll disaster.

Jeremy Corbyn has admitted he will not be Labour Party leader “at the next election” but is coming under pressure to resign on Friday, 13 December, after Labour suffered a catastrophic defeat.

Labour’s share of the popular vote fell by 7.8 percent compared to 2017 and they lost a swathe of traditional Labour seats in the North of England, the Midlands and Wales.

We’re going to hear the Corbynistas blame it on Brexit and the Labour Uber Remainers blaming Corbyn. Both are to blame for what looks like a terrible night for Labour. Both have taken for granted Labour’s heartlands. Sorry we couldn’t offer you a Labour Party you could trust.

​Mr Corbyn said Labour had put forward a "manifesto of hope" but said: "Brexit has so polarised and divided debate in this country, it has overridden so much of a normal political debate."

Go now! You & the rest of your clueless acolytes are to blame for this! You were too stupid to see your handling of the anti-semitism row was disgusting & disgraceful.
Go & take the clowns with you. #CorbynOut #CORBYNRESIGN https://t.co/torFLoLUmz

​The recriminations have already begun with many on the Right of the party and in Leave constituencies blaming Corbyn directly for the defeat.

Apparently it's everyone but Corbyn's fault. https://t.co/nReJLLyZEE

​Many people on social media claimed Corbyn had failed to tackle rampant anti-semitism within the party and others said it was his poor leadership skills which were to blame for the historic loss of seats like Bolsover and Great Grimsby.

No-one should dare try to pin this catastrophe on Corbyn alone. Those really to blame are the woke liberals and Toytown revolutionaries who dominate today's Labour party and forced Corbyn to support a second referendum. In doing so, they have brought about electoral oblivion.

​Former Labour MP John Mann said Corbyn had been deeply unpopular on the doorstep and said he was amazed he had not  "gone already".

blame jeremy corbyn all you want but come back to me next time a leader totally revamps the party, runs an incredible social media campaign, delivers the most inspiring manifesto, and doesn’t resort to the lies and hatred of the opposition

​But Corbynites have come to his defence and have claimed no leader would have been able to withstand the Tory tsunami because of Labour’s ambiguous position on Brexit.

Labour assumed they had a default monopoly on ‘hope’. They might reflect on whether their tone really was as positive & uplifting as they think it was.