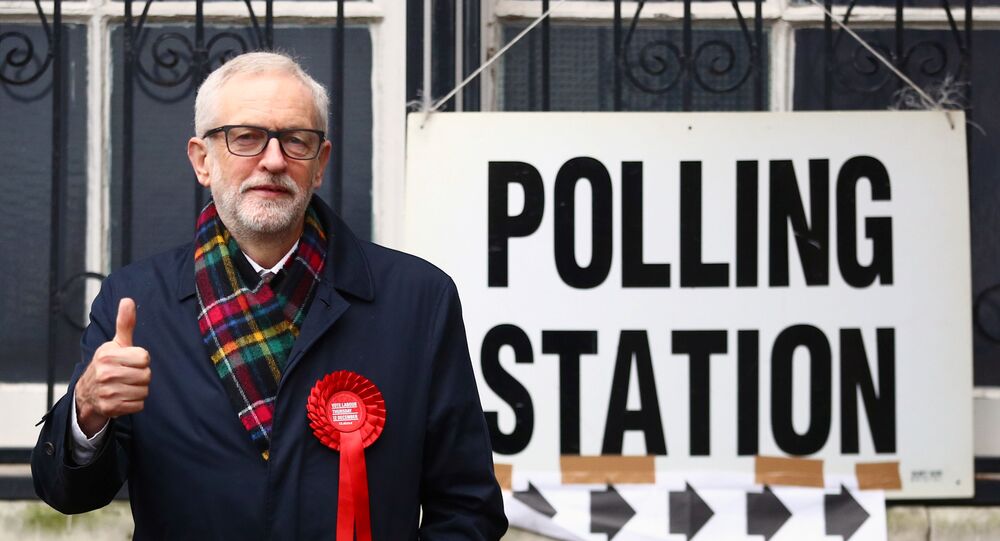 Who Will Replace Jeremy Corbyn After Labour's Crushing Defeat?

Labour Party leader Jeremy Corbyn has announced plans to stand down before the next election after Prime Minister Boris Johnson delivered what looks to be a Tory landslide in the UK poll on 12 December.

Keir Starmer and Rebecca Long-Bailey are the leading contenders to take over the leadership of the UK Labour Party, as Jeremy Corbyn has announced he would not lead the party into another election, but would stay on during a “process of reflection”, in the wake of Labour's crushing defeat in the snap poll, reported the Daily Mail.

While the final results of the country’s general election are still being counted, exit polls and results in several regions in Northern England predict a commanding majority for Prime Minister Boris Johnson.

Boris Johnson is predicted to win a 64 seat majority with the Tories heading for 357 MPs, as forecasts suggests Labour will end up with 201 seats - down 61 from its 2017 result.

Speaking in his Islington North constituency, Corbyn described the 2019 general election outcome as “very disappointing” and said he will not lead the party in any future election.

Announcing his decision after he was re-elected as the MP for Islington North, Corbyn said:

“I will discuss with our party to ensure there is a process now of reflection on this result and on the policies that the party will take going forward. I will lead the party during that period to ensure that discussion takes place and we move on into the future.”

Corbyn dismissed any blame for his party's shockingly poor performance, accusing the media of “disgusting” attacks and lauding his policy platform as “extremely popular”.

Set to Throw Their Hat in the Ring

The jostle to succeed Corbyn is set to pitch Labour's hard Left against the moderates, as frontrunner Sir Keir Starmer is being cast as the latter’s favourite to succeed Jeremy Corbyn at the helm of the UK Labour Party.

Starmer was a human rights lawyer before becoming an MP, and co-founded Doughty Street Chambers in 1990.

He worked as human rights adviser to the Policing Board in Northern Ireland, monitoring the compliance of the Police Service of Northern Ireland (PSNI) with the Human Rights Act, and in 2008 he was appointed Director of Public Prosecutions (DPP) and Head of the Crown Prosecution Service for England and Wales.

Sir Keir was elected as Labour MP for Holborn and St Pancras in May 2015.

Shadow business secretary Rebecca Long-Bailey grew up in Manchester and studied to become a solicitor, according to her online biography, while she describes herself as a “proud Socialist” in her Twitter profile.

Who will replace Jeremy Corbyn as leader of the UK's Labour party?

In 2015 she was elected MP for Salford and Eccles and has been considered a Corbynite.

Getting the vote out on a wet polling day in Salford. Don’t leave it too late, polling stations open till 10 #VoteLabour #LabourHasGotYourBack pic.twitter.com/TPj6Ahmaow

Yvette Cooper (8/1) has been an MP since 1997 and has held positions including chief secretary to the Treasury and secretary of state for work and pensions when Labour was in government.

The Shadow Chancellor John McDonnell has a 16/1 chance to go on to become leader, according to Ladbrokes, and played a prominent role throughout the general election campaign. However, he has appeared to have ruled himself out as a future leader and is understood to want his protege Long-Bailey to take over the Labour Party.

McDonnell named shadow education secretary Angela Rayner (10/1) as a possible successor to Mr Corbyn in an interview for GQ magazine in October, saying whoever comes after Corbyn “has got to be a woman”.

Also placed among those likely in the running is London Mayor Sadiq Khan.

The Gamble that Likely Paid Off

Prime Minister Boris Johnson’s snap election gamble was aimed at securing a comfortable working majority for the Tories to “get Brexit done’, and deliver on his promise to take the country out of the European Union by 31 January.

Exit polls show that the UK Conservative party is set to win a landslide victory while Labour is registering what looks like its worst result since 1935, with the Conservatives taking a string of former Labour strongholds.

The BBC is now forecasting the Tories will get a majority of 74, with Boris Johnson saying it was a "powerful mandate to get Brexit done".

Earlier, the BBC/Sky/ITV poll suggested the Conservatives would win 368 seats, 42 above the 326 needed for an absolute majority in the House of Commons.

Labour was predicted to win 191 seats, the Scottish National Party 55, Liberal Democrats 13, the Brexit Party none, Plaid Cymru three and Greens one.

If the actual results hold true and Johnson returns to Number 10 Friday with a considerable majority, in theory this will give him the power to drive through his Brexit deal.

Watch How Boris Johnson Arrived to Cast His Vote