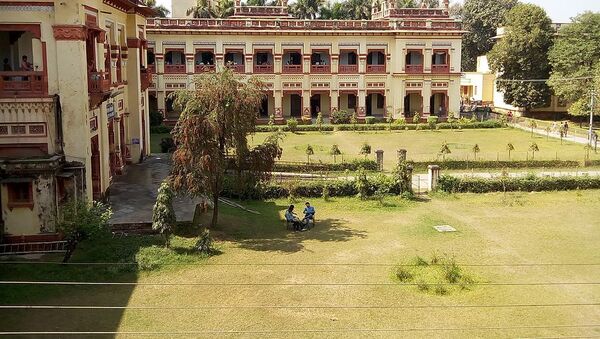 New Delhi (Sputnik): Massive protest was staged by students of India’s Banaras Hindu University, who were up in arms against the administration, over a Muslim teacher’s appointment to teach Sanskrit. Traditionally, Hindus are known for teaching Sanskrit and most of the Hindu religious texts were originally written in Sanskrit.

Netizens, including celebrities, took to Twitter to express disappointment over students of India’s leading university celebrating the resignation of a Muslim Assistant Professor from the Faculty of Sanskrit on Tuesday.

Appointed as an assistant professor in the Literature Department of the Sanskrit Vidya Dharma Vijnan (SVDV) of the Banaras Hindu University (BHU), Assistant Professor Feroze Khan resigned after a month-long protest against his selection, an official said on Tuesday.

The students in a video can be seen sharing sweets and dancing over the exit of the teacher whom they termed as ineligible to teach the subject because he was a Muslim.

Images from the @VCofficeBHU , where these 'students' have forced Prof #firozekhan to resign without taking a single class at the Sanskrit Vidya Dharma faculty . The univ admin admits the prof's credentials are stellar, but is shifting him to a diff sanskrit wing at the Univ.. pic.twitter.com/pR2zKd7UsM

​From calling it a blot on the education system of India to saying that the university doesn’t deserve him, #FirozeKhan started trending on Twitter with over 1,500 tweets.

Indian actor Farhan Akhtar tweeted on the issue and actress Richa Chadha said that the university lost a qualified teacher.

Dr #FirozeKhan resigns from #SVDV! I wish to ask the students, do we always have the same language teachers!! Why the hell is religion brought in education!!

Not the institution, it’s offered him positions in two other departments ... it’s the bigoted, ugly students of the dept, who violently opposed his appointment. So they got for a LESS QUALIFIED teacher to massage their own ego, to their own detriment. Pity them. https://t.co/pqHHtp47hS

​Twitter users extending sympathies to the “qualified” teacher and derided the students celebrating the resignation of the Muslim professor.

#FirozeKhan resigns from Sanskrit teacher post and celebrations in BHU...What a downfall of this university. pic.twitter.com/aC6KD5Lxu9

Pt. Madan Mohan Malaviya will be so proud today, when religion of a teacher is more important than his knowledge for the Kashi Hindu Vishvidhyalay students. Shameful chapter in the history of #BHU #firozekhan pic.twitter.com/B7zfdEHxUA

Dr #FirozeKhan resigns from #SVDV! I wish to ask the students, do we always have the same language teachers!! Why the hell is religion brought in education!!

Thanks to their immorality and unethical demand of removing Prof #firozekhan. Prof. #FirozeKhan deserve to educate humans not donkeys.

BHU students are supposed not to continue their studies if they are ingrained with such disrespectful mentality.
Shameful act of #BHU.I applaud Dr. Firoz Khan for his passion. Instead of encouraging and appreciating him, BHU students are behaving as looser. #FirozeKhan.

While the resignation drew strong criticism towards students that were against Khan’s appointment, there were some who justified it.

It is not about the language Sanskrit, anyone who knows Sanskrit can teach but it’s all about Karmakand means practices and deity rituals that are only conducted by a person who is Hindu by religion and have adequate knowledge & have practiced in ceremonies or family. #FirozeKhan

If a Hindu could not become a Maulana while living in Hinduism. Then despite being Muslim, how did #Firozekhan dare to become a teacher of Hinduism.

The school was founded by Pandit Madan Mohan Malaviya and it was a rule made by him.

#FirozeKhan
Good riddance. No compassion for supporters.
Muslims should introspect, why they are so much disliked all over the world.

​The university administration has credited Firoze Khan as a “stellar” teacher who was appointed as per the norms and guidelines of the university.

Meanwhile, reports said that an assistant professor Shantilal Salvi, who came out in support of the teacher, claimed to have been attacked by a group of students who were against Khan’s recruitment. He had openly spoken against the kind of treatment being meted out to Feroze Khan.