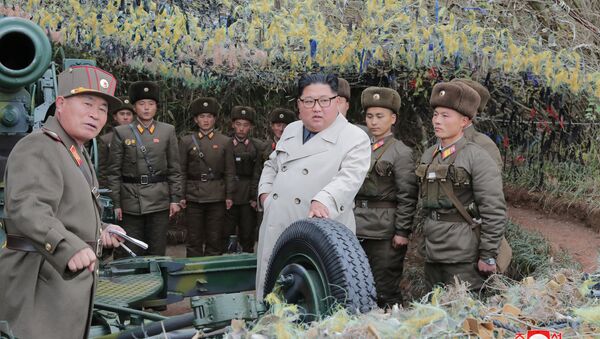 In late-October, the South Korean Joint Chiefs of Staff stated that Pyongyang fired two identified objects towards the Sea of Japan.

Two ballistic missiles launched by North Korea toward the Sea of Japan flew around 380 kilometres (236 miles) at an altitude of 97 kilometres, the South Korean Joint Chiefs of Staff said on Thursday.

"North Korea fired, at 16:59 local time [07:59 GMT], from the territory of the Hamgyongnamdo province [South Hamgyong] toward the East Sea [Sea of Japan] two short-range missiles, which presumably are large-caliber multiple-launch rocket systems. The ultimate range made around 380 kilometers, and the altitude made 97 kilometers," the South Korean Joint Chiefs of Staff said in a statement.

"Such steps by North Korea do not contribute to easing tensions on the Korean Peninsula. The South Korean military expresses deep regret over the launches and calls explicitly for immediately ceasing activities creating military tensions," the South Korean Joint Chiefs of Staff added.

The Japanese naval security service has registered a new missile launch from North Korea, adding that the missile has fallen into the Sea of Japan, outside the country's exclusive economic zone.

"Repeated launches such as recent ballistic missile launch by North Korea are a serious issue for the entire international community, including Japan. In order to protect the lives and assets of the people, we will continue to make every effort to collect and analyze information and conduct surveillance," the  Japanese Defence Ministry. said in a separate statement published on its website.

The missiles have most likely landed outside Japan's exclusive economic zone.

This is already the twelfth launch of this kind since May.

The incident comes days after North Korea state media reported that the Korean People’s Army (KPA) had conducted a series of artillery drills near its maritime border with the South with Kim Jong-un being present at the exercise.

According to the report, Kim Jong-un ordered the armed forces to conduct "real war-like drills" at a "higher degree of intensity."

Tokyo Ready for Dialogue With North Korea Without Preconditions Despite Missile Launch
In late-October, North Korea launched two short-range projectiles that flew 370 kilometres at an altitude of 90 kilometres towards the Sea of Japan.

North Korea has recently fired a number of unidentified projectiles from the coastal city of Wonsan. All the projectiles, launched this year followed a similar pattern and were closely monitored by Japan, South Korea, and the US. At the same time, Pyongyang insists it is ready to continue talks with the US, aiming for the denuclearisation of the Korean Peninsula.