Russian Scientists Discover How Parasites Protect Themselves From Host 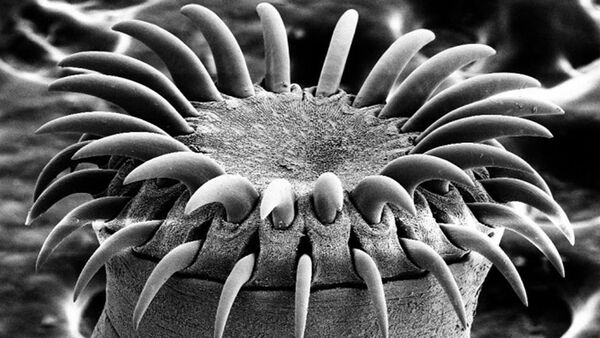 Scientists at Tyumen State University (UTMN), together with their colleagues from other Russian universities, have isolated and described previously unknown tapeworm proteins that protect parasites from being digested by their hosts and weaken their immunity, the university’s press service said.

Tapeworms (or cestodes) are a class of flat parasite worms. The adults live in the intestinal tracts of the vertebrates and usually have several hosts during their life cycle; they also may pose a considerable threat to human and animal health.

Due to their parasitic mode of life, these worms completely lost their digestive apparatus but have a well-developed reproductive system and special organs that help them attach to the host’s tissues. They also needed a mechanism to protect themselves from intestinal substances, specifically from trypsin, which breaks down proteins and peptides, and can hydrolyze esters.

Yevgeny Rogozhin, Candidate of Chemical Sciences, a senior researcher at Tyumen State University, noted that there are few works on the biochemistry of tapeworms, and their molecular diversity is only superficially studied. Studies of proteins secreted by nematodes, inhibitors, that block the activity of digestive ferments cover numerous types of these parasites.

"While studying cestodes, the focus was on tenias and echinococci, as they are the most dangerous for humans and animals. Other species remained understudied, and neither their inhibitors nor the mechanisms of their work have been known until recently," Rogozhin said.

Scientists have studied the Triaenophorus nodulosus parasites, which cause triaenophorosis, a dangerous disease in freshwater fish damaging their liver and intestines. The scientists managed to identify two previously unknown polypeptides weighing about 14.4 kDa with different N-terminal amino acid residues.

The search for homologous sequences has shown that the isolated peptides belong to a separate type of trypsin inhibitors – the Kunitz type proteins, which are found in both vertebrates and invertebrates.

Scientists have found that besides their inhibitory activity, these proteins are involved in blood clotting and inflammatory processes. Proteins of this type have previously been isolated from other tapeworm species. In addition to protection from digestive ferments, they were involved in weakening the host’s immunity.