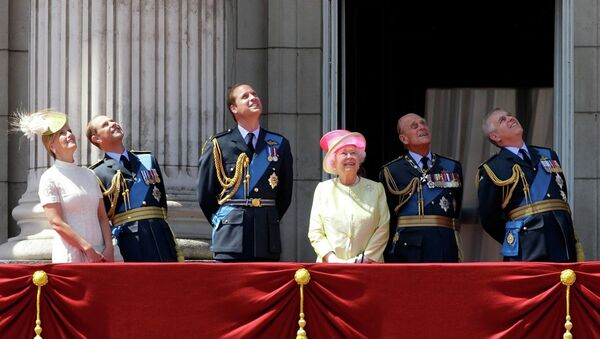 © AP Photo / Matt Dunham
Subscribe
A week has passed since Prince Andrew’s catastrophic interview about his friendship with paedophile financier Jeffrey Epstein, with new details about how his royal relatives are taking the crisis continuing to emerge. One report suggests that the Duke of York had “hoodwinked” his mother the Queen about discussing the scandal in detail with the BBC.

Prince William was unhappy with the Duke of York’s behaviour, supporting the decision to remove him from public activities amid the Epstein scandal and allegations that he had sex with an underage girl years ago, The Sunday Times reported, citing an unnamed source. The Duke of Cambridge is said to have decided that this was “the right thing to do”.

The royal reportedly discussed his disgraced uncle’s future with his grandmother, the Queen, and his father, Prince Charles.

“William is becoming more and more involved in decisions about the institution [the monarchy] and he's not a huge fan of his uncle Andrew”, another source, cited by the outlet, said.

Earlier, rumours emerged that Prince Charles was responsible for "sacking" his brother and doesn’t want him to return to public life following the controversial statements he made during his BBC interview.

Details about Prince William’s alleged stance on the Duke of York’s situation emerged amid reports about the lead-up to the “damage control” attempt-turned-public relations disaster. According to the Daily Mail, he reportedly “hoodwinked” his reigning mother, as he did not warn her that he was going to speak to the BBC about the scandalous allegations at length. The report cited a royal source claiming that Prince Andrew had told the Queen during their “son-to-mother” conversation that he would discuss his relations with Jeffrey Epstein, but “without going into details”.

At the same time, his former wife Sarah Ferguson and daughter Princess Beatrice are said to be the ones who pushed him to clear things up in a lengthy interview. Ferguson reportedly believed that if he spoke out and denied the allegations in his own words, then the public would be convinced that he told the truth – expectations that turned out to be a far-cry from the actual outcome of the interview.

The 59-year-old royal gave his first TV interview about the explosive scandal last week. Speaking to the BBC, he denied that he had sexual contact with Virginia Roberts Giuffre, who was a minor at the time and is now one of Epstein's accusers, in 2001.

Following the interview, the Duke of York announced that he had asked the Queen, his mother, for permission to step down from public duties and drop out of the public eye for the “foreseeable future”, due to his "regrettable" association with the paedophile Epstein, which has now “become a major disruption” to the royal family. Prince Andrew said that he deeply sympathises with Epstein’s victims.

Woman Who Accused Jeffrey Epstein of Rape Claims He Boasted About Friendship With Prince Andrew
Queen Elizabeth II has cancelled planned celebrations for the Duke’s 60th birthday, which will reportedly be replaced with a small family dinner. However, the Queen was recently seen riding with Prince Andrew, said to be her favourite son, in a move that is thought to be a sign of support.

Major companies and banks, including British Telecom and Barclays, have distanced themselves from the prince and withdrawn from his Pitch@Palace project. Several charities have also ditched him as their patron.

000000
Popular comments
Time for these over privileged spongers of the public purse to be shown the door, the whole lot of them. Surely there's enough of their $$ loot sitting in secret tax free havens for them to survive on.
astrodetective
24 November 2019, 22:20 GMT2
000000
Andrew is not the exception in that family of satanists, he is rather the general characteristic, or the rule.