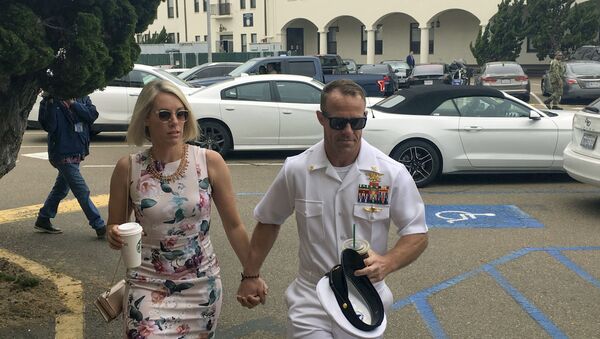 US Navy SEAL Special Operations Chief Edward Gallagher, 40, was accused of committing war crimes while deployed to Mosul in Iraq in 2017.

Gallagher's elite rank - which was recently restored by US President Donald Trump following the soldier's court-martial - could be removed as the US military has already notified him.

Gallagher had been demoted following a July conviction for posing in a photo with the body of a dead terrorist during a 2017 deployment in Iraq, but was cleared of murder charges stemming from the enemy fighter’s fatal stabbing.

According to media reports, if Gallagher loses his rank as a SEAL, he would either have to retire or find a different position in the Navy. Reuters reported Wednesday, citing Gallagher's defence team, that the move to take away Gallagher's Trident pin designating him a SEAL was being driven by Naval Special Warfare commander Rear Admiral Collin Green.

Gallagher would have reportedly faced a possible life sentence had he been convicted on the charges he faced.