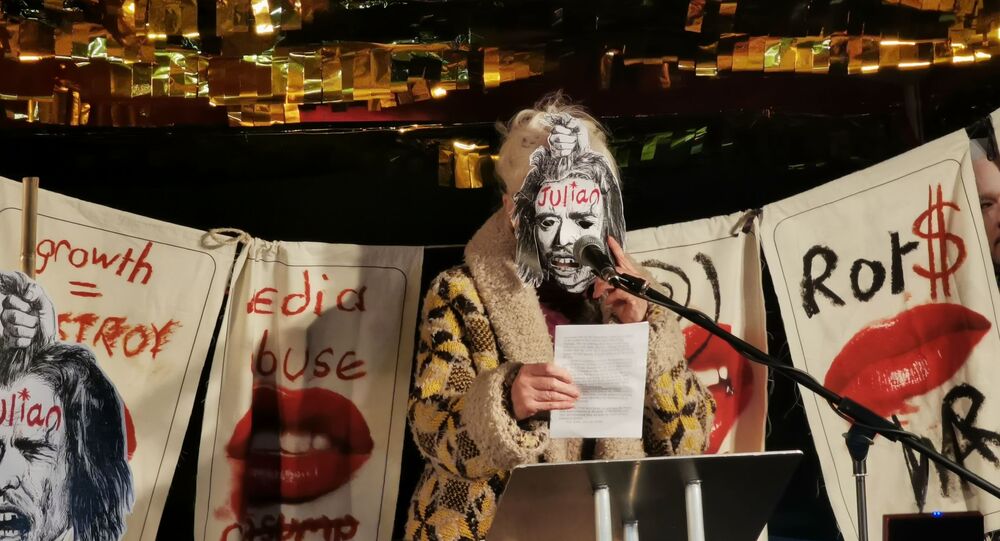 The event, backed by the Julian Assange Defence Committee, Socialist Equality Party and Stop the War Coalition, gathered hundreds across the UK and abroad outside the UK Home Office to protest the Wikileaks founder's extradition to the United States.

A masked Ms Westwood began her speech by slamming the actions of the UK government against the Wikileaks founder. “I am here to protest government corruption and the death of justice,” she said.

She encouraged everyone in Britain to read the Australian whisleblower's documents, stating that it was “the most important report from the last 10 years”.

“Thank God for Tim Berners-Lee, we have a voice,” she said.

Speaking on Assange’s 21 October hearing at Westminster Magistrate’s Court, she slammed it as a “show trial” where “the guilty verdict is already decided. It's a sham."

Assange must be taken out of his "illegal" solitary confinement prior to his release, which the media failed to report, including the BBC, Ms Westwood said.

She said: “The best way to convince people we have a free society is to limit information, and then to encourage free and fair discussion within those limits.

The United Nations had also changed the UK government with torture by taking “someone’s identity and reputation” and that Mr Assange should be freed with compensation, she said citing a UN report.

She explained: “For the last nine years, America has been preparing its secret court, with a staff of 800 people. Julian has known about this all along. Julian has been charged. It is a crime to expose American war crimes. If he goes to the secret court, it is again another show trial. You are guilty of exposing American war crimes. Therefore, you have been telling the truth and we sentence you to 174 years in concrete.

Fighting against “mass extinction and the death of the planet” was linked with saving Julian Assange, she said. “They are connected [and] the result of government corruption globally".

“Free Julian, save the world. Rock and roll,” she said.

The speech was made just days after Nils Melzer warned in early November that the UK had not taken steps to ensure that Assange's ongoing detention complied with international law, adding that the case had not been about the Wikileaks' founder's innocence, but "about making him pay the price for exposing serious government misconduct".

The news follows a previous statement in May, where Mr Melzer said that the US, UK and Sweden had inflicted "deliberate and concerted abuse" on Assange, leading to his deteriorating health due to stress and psychological trauma.

Julian Assange remains charged by the US under the 1917 Espionage Act for his work with WikiLeaks after he was forcibly dragged from the Ecuadorian embassy in April. If extradited, he could face 18 counts for various offences totalling 174 years in jail.