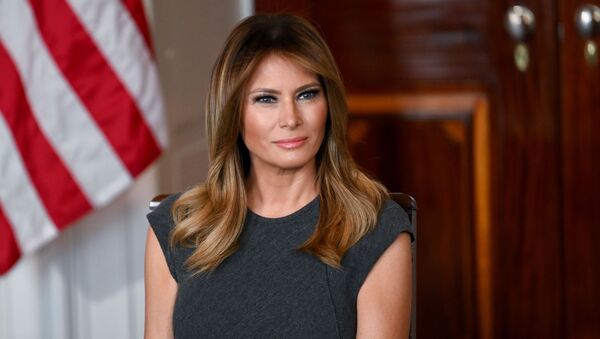 Svetlana Ekimenko
All materialsWrite to the author
US President Donald Trump has reportedly backed off an earlier proposal to ban flavored e-cigarettes amid warnings by political advisers and lobbyists not to antagonize supporters, while a recent report by the US Centers for Disease Control and Prevention says 42 people across 24 US states have died from lung injuries linked to e-cigarette use.

"Through her initiative, Be Best, Mrs. Trump has put her priority on the health and safety of children. She does not believe e-cigarettes or any nicotine products should be marketed or available to children," said Grisham.

Earlier, in September, Melania Trump was part of an announcement by the US President and Health and Human Services Secretary Alex Azar made before media in the Oval Office, when Trump stated there would be new "very strong recommendations" to ban the use of flavoured e-cigarettes.

At the time the First Lady tweeted:

The tweet generated a wave of response on social media, as some commented on lack of research into the matter:

1st, ecigs are NOT TOBACCO related - the opposite. 2nd, only US reports are neg., research UK reports. 3rd, its mainly THC products and bought off street. 4th, not new for teens to smoke, better than real cig. Last, medical and media are making this what they want. Stop it.

Cigarettes kill nearly 500k people per year and millions of smokers have successfully used e-cigarettes to quit. Youth experimentation, although unfortunate, should not give rise to fear mongering and threats from the federal government of prohibition.

Many tweeted the importance of “silencing guns” to prevent innocent deaths.

Some thoughts.
-Sounds like you support banning tobacco, which is fine with me but may piss off the tobacco lobby, which is also fine
-The tobacco lobby probably supports the ban on vaping since e-cigs cut into their profits
-Now do assault rifles

You just walked into the "kids dying" trap.

You will have to speak out about guns too.

Your silence about guns will prove you really don't care about all kids, just your kid.

We get it. The Trump family has no investments in e-cigarettes yet.

You can always spot a Staff written tweet a mile away.

​There were those who expressed their support for the First Lady.

You’re a beautiful, intelligent woman of God serving others in humble kindness. I #StandWithMelaniaTrump @FLOTUS on this very real issue, people need to quit criticizing and focus on the problem presented because whether you like @MELANIATRUMP or not you must respect her position pic.twitter.com/jrcgmrM9jO

Thank you First Lady. America is with you 🇺🇸

​The announcement of the First Lady’s stance regarding the contentious issue comes as President Donald Trump is believed to be putting political considerations to the fore ahead of his previously mulled plan to ban flavoured e-cigarettes.

According to The New York Times, Trump was reportedly persuaded by advisers to shelve the proposal during a 4 November flight to a political rally in Kentucky, as his move could potentially be met with criticism from supporters.

The publication also reported that of late, Trump has been lobbied by tobacco and vaping companies, as well as organisations like Americans for Tax Reform, which are concerned lest regulatory restrictions negatively impact the booming e-cigarette industry.

Public health officials have been sounding the alarm over a rising number of teens using e-cigarettes, because nicotine can harm a young person's developing brain. E-cigarettes typically contain nicotine as well as other chemicals that are known to damage health.

The Centers for Disease Control and Prevention warns that young people who vape may be more likely to start smoking traditional cigarettes.

According to a recent report by CDC 42 people across 24 US states have died from lung injuries linked to e-cigarette use, with over 2,000 patients experiencing vaping-related illnesses in recent months.