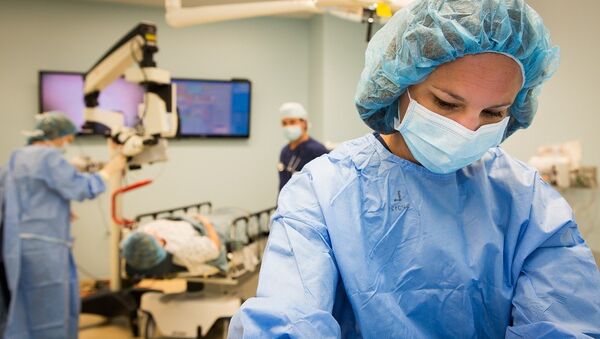 Hours after the separation, the supervisor general of the King Salman Humanitarian Aid and Relief Center (KSrelief), Abdullah Al Rabeeah, revealed the details about the unique surgery that kept his medical team awake for 14 hours.

Al Rabeeah, who headed the 35-member surgery team, happily started the interview by saying that both twin boys, Ahmad and Mohammed, were doing well.

"They are stable and their vital signs are also stable," he said. "They're recovering extremely well from the surgery and the doctors in the intensive care unit and all the surgeons are happy about the outcome."

The surgery to separate the Libyan Siamese Twins was conducted on Thursday, and during all the 14 hours none of the surgeons went to sleep.

"Some of them took breaks to go to the washrooms and to take a snack, but all the surgical team was available around the operating room; not necessarily inside the room," Al Rabeeah noted. "Some of the surgeons are working are inside the room, and others of other specialties who are not needed could go to take a short break and come back."

In addition, the twins had "a lot of adhesions inside their bowel" because of previous surgery performed in Libya, according to the doctor.

"This was also another challenge for the surgeons. However, the surgical team managed to overcome those difficulties with a good outcome in timely planned phases," he added.

Spree of Surgeries in the First Days of Life

The twins were born on June 26, 2019, in a small hospital in Libya, the chief doctor revealed.

"The twins initially did not have an anus and they have to be subjected to immediate surgery to open the colon colostomy to allow them to have their bowel movements come out through the colostomy," he said. "This was an emergency procedure that was done in their homeland hospital."

Both parents of the twins are Libyans. Ahmad and Mohammed were their fourth births but their first boys, so the twins have three older sisters who are normal, Al Rabeeah said.

"The family tried through both traditional and social media to look for any help in a hospital that has capabilities, and they have approached King Salman Humanitarian Aid and Relief Centre," he noted. "This case was studied by the surgical team at King Abdullah Specialist Children's Hospital. After reviewing the case, the experienced conjoined twins' team accepted the case which was actually totally sponsored by the government of Saudi Arabia."

Rehabilitation, Prosthetics are Ahead

Once the family arrived in the kingdom, the doctor went on, the twins were taken to the hospital for an extensive medical checkup, including with the use of diagnostic radiology. After the necessary examination was completed, the team of doctors decided to proceed with the surgery.

The twins are now placed in the pediatric intensive care unit to be monitored by both the intensive care team and the surgical team, Al Rabeeah noted.

"The babies will stay in the pediatric intensive care unit for approximately 2 weeks to allow them to recover, gradually remove the artificial respirator, and to start their feeding," he noted. "Once they are stable, they will be taken to the pediatric surgical ward where they will be subjected to rehabilitation for their single lower extremity. Each one will require a lot of physiotherapy and rehabilitation to enable the Twins to have a better position for the single lower extremity."

Moreover, Ahmad and Mohammed will be measured for future prosthetic lower extremity, the doctor noted, adding that this last phase is expected to last between 8 and 12 weeks based on the recovery.

"When I saw them after surgery, I really felt very happy that they are stable, and they are progressing well," he said. "I saw the big smile in the face of the father and mother because they were under a lot of pressure before the surgery, but now it is a big happiness for them to see their children, for the first time, in two separate beds. The surgical team and I are happy to be part of this happiness for this family."

Al Rabeeah pointed out that the Saudi Conjoined Twins Program is completely funded by the Saudi government, with King Salman bin Abdulaziz and Crown Prince Mohammed bin Salman not only financially supporting it but also encouraging the surgical team to continue these noble humanitarian efforts.

The program has become very famous, with Saudi doctors conducting two-three such surgeries per year, he added.

"To date, we have reviewed 108 cases in the last 30 years, and only 48 of them were subjected to separation," he said. "The other cases actually were having major anomalies or a single heart that did not allow any surgical procedure. We are also very happy to see that the Saudi Conjoined Twins Program has a very high success rate and has become a reference in the region and globally."

Al Rabeeah stressed that the surgical team was dedicated to help such poor children and bring relief and support to their families, noting that the process to select twins for separation was "based totally on unscientific standards."

"We have a very capable multidisciplinary team from different specialties who really take each case and study it very well," he explained. "We do all the detailed investigations and diagnostic radiology, and if the twins are amenable for surgery with a success rate that will not pose a danger or endanger the life of one or both, we will proceed with the surgery. The only cases that will not come to surgery are those who have either a single heart or a complex shared heart."

The doctor noted that out of 48 separated twins, making them 96 patients, 90 are still alive and doing well.

"We will continue to follow them. Those who have been lost and passed away, either they were prosthetic or have died months or years after surgery from diseases other than the surgery itself," he noted.

Al Rabeeah stressed that they remain in regular contact with their patients and families.

"We are in both continuous communication with the patients and their parents and sometimes we will bring some of them back to Saudi Arabia to be reviewed and studied by the surgical team," he explained. "As a matter of fact, as we speak now, we have 3 of them who have come for follow up to be sure that they are receiving the optimal care. A few years ago, we have brought all the twins for an assessment and we have called it "Conjoined Twins Party."

He expressed hope that all the twins helped by the program would continue to live a normal life.

The doctor unveiled that they were now studying the case of the twins from Mauritania who will then be probably brought to Saudi Arabia for surgery.