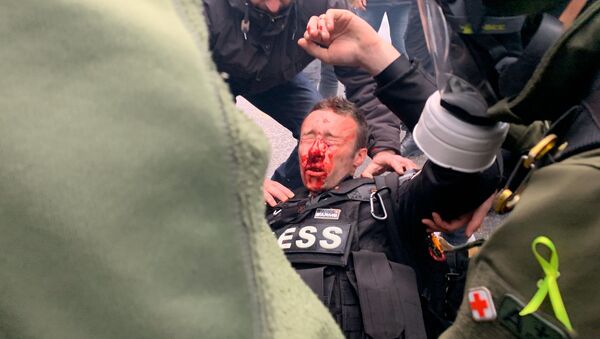 © Sputnik / Sputnik
Subscribe
MOSCOW (Sputnik) - Paris police have banned the yellow vest rallies in the city because of violent clashes between protesters and police officers, the city’s prefecture said on Saturday.

"Taking into account abuses and violence committed, the prefect of [Paris] police has requested the cancellation of the event planned from the Place d'Italie [Italy Square]", the prefecture said on Twitter.

​According to a Sputnik correspondent, on Saturday afternoon, protesters built several barricades on Italy Square, and then set them on fire. The fire brigade arrived at the scene. Police squads are also present, deploying tear gas at the demonstrators.

Protesters shout offensive slogans to the police and throw glass bottles and rubbish. Thick acrid smoke hangs over the square every now and then, claps from the burst of shells and the screams of the crowd are heard.

The rallies often ended in violent confrontations between police and demonstrators, with the later hurling stones and projectiles at officers, smashing cars and shop windows and erecting and subsequently burning barricades. Police repeatedly resorted to tear gas and water cannon to disperse the most violent demonstrators, The clashes resulted in numerous injuries, some very severe, among both police and protesters.