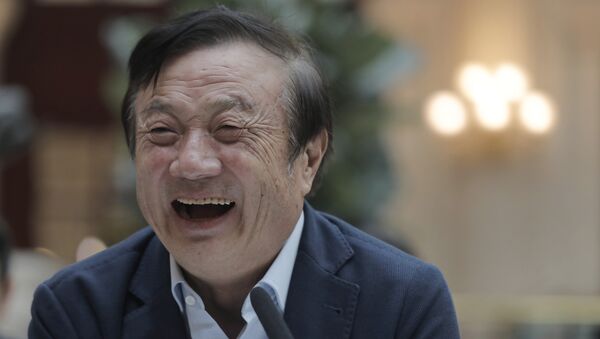 Demond Cureton
All materialsWrite to the author
The news comes after the US placed Huawei, ZTE and over 70 other Chinese telecom on an entities list in May, citing allegations that Huawei posed a 'national security threat' to US infrastructure and barring the Chinese multinationals from buying and selling to US firms.

Huawei can lead without help from the United States and could produce its own products and technologies, company founder and CEO, Ren Zhengfei said in an interview with the Wall Street Journal on Wednesday.

The tech giant would not be used as a "bargaining chip" in trade talks, Ren said, adding that the Chinese telecoms giant could "survive without the US" and would embrace globalisation instead.

Ren Zhengfei added that he would welcome US firms to sells parts and components to Huawei, but that the company would survive if they chose not to.

There were no difficulties under the Obama and Trump administrations, he said, adding that US president Donald Trump gave the Chinese firm the impetus to "survive by ourselves and work harder".

When asked if Huawei's success threatened the US, Mr Ren Zhengfei said that the US could not "feel threatened by our success" because Americans had a "strong capacity to innovate".

Should the US develop its own 5G programme, it would have no problems in "catching up", he said.

“I haven’t stopped loving America because America attacked me,” Ren said when asked about his feelings towards the US.

When asked on his thoughts about the US entities list, Ren said: “We don’t expect the U.S. to remove Huawei from the entity list. They may as well keep us there forever because we’ll be fine without them.

Rumours On Huawei Talks With US Telecoms

The Huawei CEO also refuted rumours on Wednesday that his company was in direct talks with US officials to gain 5G licences with American firms, according to Reuters.

He said as quoted by Reuters: “There are currently no U.S. companies talking to us directly, because middlemen who have come to talk do not necessarily represent the big U.S. companies, as this is a big and difficult introduction”

“It is only when someone is willing to come and discuss this issue with us will we find an investment bank to help us find an intermediary to discuss the deal, contract and cooperation, but not yet,” he said.

The statements come as the Chinese telecom has begun shifting its 5G networking products away from US technology, at roughly 5,000 base stations a month, according to Huawei executives.

Mr Ren Zhengfei issued similar staements in October stating that his company would thrive in the long term, despite potentially losing access to Google Play services and being placed on the US entities list.

Huawei Strikes Out On Its Own Despite US Trade War

Despite the Trump Administration's efforts to block Huawei's global market share, sales for the Chinese firm spiked 24 percent from January to September 2019, whilst earning revenues at £67.1bn and a 26 percent jump in global smartphone shipments, or more than 185m units.

5G networks have been rolled out at an faster pace and gained 60 commercial 5G contracts with global carriers, in addition to shippping 150,000 5G base stations worldwide, among others, the company said in an October report.

The news comes as countries such as India, Germany, the United Kingdom, Czech Republic and France have agreed to continue working with Huawei on building their own national 5G networks, with New Delhi stating it has not yet decided whether it would ban Huawei from 5G tests, Huawei India CEO Jay Chen said in October.

US president Donald Trump handed Beijing a reported 'olive branch' in early October, allowing US tech firms to supply some components and materials ahead of crucial talks in DC, the NYT reported, but further reports said that Chinese deputy-level talks had failed achieve any progress. Huawei and Beijing have repeatedly denied all allegations that its technologies are being used to spy on clients, and have slammed accusations from Washington as false. Despite this, countries such as New Zealand, Japan, Australia and others have barred Huawei from building their 5G networks to comply with pressure from Washington.