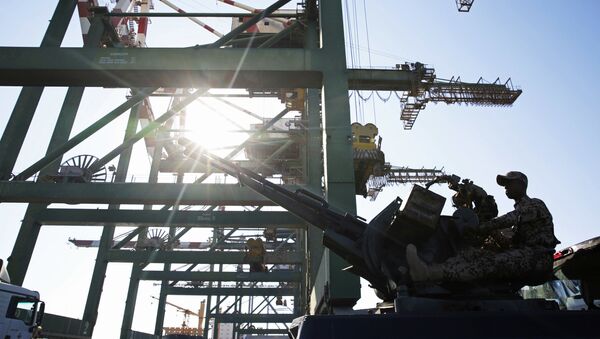 The footage shows an Oshkosh armoured vehicle and other US-made military hardware being unloaded from a ship under the cover of darkness in the early morning hours at the port in the southern city of Aden, CNN reported.

The vessel, identified as the Saudi-registered Bahri Hofuf, is known to have stopped at the Port City of Jeddah on September 17 before sailing on to Port Sudan the following day, the report said, citing port documents, tracking data, and whistleblower accounts.

America: "Under shroud of secrecy US weapons arrive in Yemen despite Congressional outrage" CNN

America is outraged when Iran does this but does nothing when Saudi Arabia does. More of America's 2-faced international diplomacy? #yemen #SaudiArabia #Iran #UnitedNations pic.twitter.com/39eFx6wFpv

​The ship's tracking system was then turned off before being switched on again in Aden on October 29, the report added.

Under shroud of secrecy US weapons arrive in Yemen despite Congressional outrage - CNN https://t.co/qydpMQ1ziM pic.twitter.com/yifafnTkmO

The latest delivery is likely to raise fresh alarm among US lawmakers, who have sought to block the Trump administration from selling arms to Saudi Arabia and the United Arab Emirates over previous reports that American weapons had been transferred to terrorist groups in Yemen, including organizations linked to al-Qaeda (banned in Russia).

The US Congress in July passed three measures aimed at blocking arms sales to Saudi Arabia and the UAE, but President Donald Trump later the same month vetoed the legislation.

Under US law, recipients of American-made arms are forbidden from transferring equipment to third parties without prior authorization from Washington.

But a CNN investigation in February uncovered evidence that Saudi Arabia and its coalition partners gave militants linked to the al-Qaeda terrorist group (banned in Russia), Salafi militias and other factions in Yemen weapons that were manufactured by the United States, in breach of its arms agreements with Washington.

Yemen has been locked in a conflict between the government forces led by President Abd Rabbuh Mansour Hadi and the Houthi rebels. A Saudi-led coalition has been conducting strikes against the Houthis at Hadi's request since March 2015.