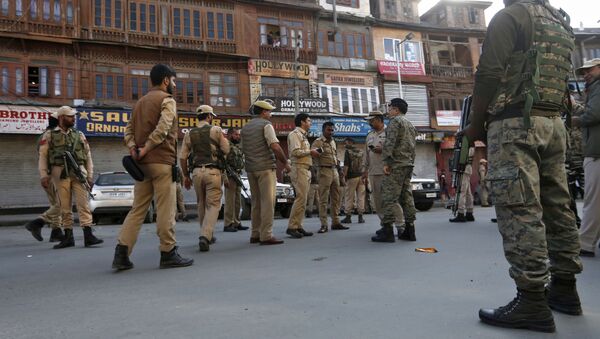 New Delhi (Sputnik): On Tuesday, in an unprecedented move, police personnel in New Delhi organised a protest demonstration for almost 10 hours, to demand action against lawyers involved in the physical assault of their colleagues

A violent faceoff between police and lawyers in a district court in India’s national capital of New Delhi continued without any resolution in sight, crippling the functioning of lower courts for the third day on Wednesday.

Lawyers of subordinate courts in the national court locked the gates of court premises, and called a strike on Wednesday, interfering with proceedings. Many litigants, who were summoned to appear in the courts, had to return home without having their cases heard. Lawyers in many states also went on strike in support of their colleagues in Delhi.

Meanwhile, a lawyer from the Supreme Court of India has served the Commissioner of Delhi Police with a legal notice for “not taking action” against police personnel who participated in a Tuesday demonstration to protest against violence against them by lawyers.

A Supreme Court lawyer serves a legal notice to Commissioner of Police, Delhi for, "not taking action against the Delhi Police Forces and their officials, who actively participated in the demonstration on November 5 in front of Police Headquarters, ITO." pic.twitter.com/Bz87RXwUh4

​Lawyers are continuing the strike despite requests to abandon their protests from the Bar Council of India – the statutory regulatory body governing legal practise and legal education in India. The Bar Council reached out to lawyers, informing them that the High Court of Delhi has already ordered a judicial inquiry.

"Hooliganism and violence have no place in the Bar. The leaders will have to stop it immediately. It's my earnest and humble request. Kindly identify those advocates (if they are advocates in the real sense) and send their names and other details by tomorrow to the office of the Bar Council of India," reads a letter by Manan Kumar Mishra, President of the Bar Council of India addressed to the lawyers' various representative bodies.

The Lieutenant Governor of Delhi, who controls the police force in Delhi, summoned the city police's top brass to review the situation and find a way out of the standoff between the police and lawyers.

On Tuesday, in an unprecedented move, police personnel in New Delhi organized a protest for almost 10 hours to demand action against the lawyers involved in the physical assault of their colleagues.

We strongly condemn the cowardly action perpetrated against the police personnel at Tis Hazari Court. We stand by our colleagues in their time of distress and hope the culprits are brought to justice soon.