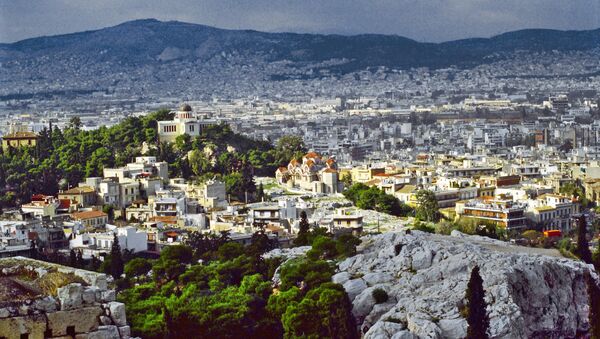 Three years have passed since US Ambassador to Greece Geoffrey Pyatt arrived in Athens as head of the American diplomatic mission. His interest in Greece is enormous. The experienced career diplomat is seen, literally, everywhere, and takes part in almost all areas of public life. But what is behind this show?

“The activities of Geoffrey Pyatt undoubtedly go beyond his diplomatic duties. His activity includes regular meetings that he holds with representatives of the Church and the media, entrepreneurs, and government officials throughout Greece. He continues to 'provide recommendations' in Alexandroupolis to officials who 'mistakenly' began developing relations with Russia, and to cities where the authorities were open to dialogue (with the Russian Federation – ed. note Sputnik)”, the former Greek Deputy Defence Minister Kostas Isihos said.

Before his appointment to Athens, Geoffrey Pyatt served as the US ambassador to Ukraine. It was under him that a coup d'etat took place in Ukraine and, analysts believe, it was he who was the main instigator of Euromaidan.

“He officially took office as the US ambassador to Ukraine in 2013 and took an active part in anti-government activities”, a member of the International Logic of History School, professor at the Technical University of Crete Dimitrios Patelis recalled.

The 2014 coup d’état led to the removal from power of then-Ukrainian President Viktor Yanukovych and the coming to power of the pro-American Petro Poroshenko. As the US Ambassador to Ukraine, Geoffrey Pyatt became known for leaking the recording of his telephone conversation in January 2014 with then US Assistant Secretary of State Victoria Nuland.

“A telephone conversation between Mr Pyatt and Mrs Nuland, which focused on the situation in Ukraine, was published. They routinely, toughly, and guardedly discussed what the composition of the government in Ukraine should be like. An ordinary coup d'état”, Dimitrios Patelis said.

The State Department later admitted that the US had invested $5 billion in “support for democracy” in Ukraine.

“The role of Mr Pyatt and Mrs Nuland was decisive in the events in Ukraine at the time when large anti-government protests took place. It is enough to recall how they treated the protesters with cookies. Before and after the coup, Pyatt played an important role in 'directing' the new government of Kiev to a new anti-Russian hysteria”, Kostas Isihos said.

The diplomat was sent from Kiev to Greece, which traditionallly has had friendly ties with Russia.

“Being one of the architects of the coup d'etat in Ukraine, and having assumed an important post in terms of geostrategic position not only for Greece but also for the entire Balkan and partially Turkish region, Pyatt directed all his actions to spoil the good relations that Greece could and should have had not only with Russia but with all of Eurasia. He succeeds in supporting and inciting Russophobic sentiments in Greece”, Kostas Isihos added.

In October, Greece and the United States concluded an indefinite agreement on cooperation in the defence sector, which, in addition to expanding the US Sixth Fleet's naval base in Crete, provides the Pentagon with the infrastructure of the bases at Stefanovikio, Larisa, and Alexandroupolis.

“Furthermore, there is the EastMed pipeline project (Eastern Mediterranean natural gas pipeline project – ed. note Sputnik) that is based on cooperation between Greece, Cyprus, and Israel. The idea being promoted is that this project will help the economic well-being of countries but for this, it is expedient to militarise the region first. And Mr Pyatt plays a very significant role here”.

At the same time, Isihos accused the US ambassador of being behind a crisis in the Church:

“The US ambassador also plays a key role in the crisis in relations between the Greek and Russian Orthodox Churches. It is not an accident that the leading Greek media began broadcasting Russophobic news”, he said.

Dimitrios Patelis analysed the US ambassador's actions with regard to the military:

“The actions of the US ambassador are the embodiment of a robust intervention policy. He held meetings with the military leadership of the Ministry of National Defence of Greece, bypassing political leaders. This is unacceptable. The ambassador cannot invoke the interests of the armed forces of an independent state, nor can he unilaterally represent the interests of the American monopolies in Greece”, the professor said.

At the same time, Pyatt promotes the image of a so-called “citizen diplomat”: he shows interest in Greek sports, meets with Giannis Antetokounmpo (Greek professional basketball player for the Milwaukee Bucks in the NBA) and Greek Deputy Sports Minister:

“He promotes a certain lifestyle, tries to popularise 'people-to-people diplomacy' and he exploits the popularity of sports among people and youth to create an image of a person who loves sports, is engaged in it”, Dimitrios Patelis said.

“Pyatt called Greece 'a mechanism which opens doors' in promoting the strategic interests of the US and NATO in the region. During the crisis, he did everything possible to ensure the Mediterranean and the Middle East regions’ subjugation to the American chariot”, the expert added.

“A random person cannot be appointed as the US Ambassador to Athens, given the strategic importance of Greece, especially in critical times. The fact that this diplomat was sent to Greece is certainly not a coincidence as is the extension of his term. He serves the American government system in the best way”, Dimitrios Patelis summarised.

Thrace and especially the port of Alexandroupolis are of great interest to the US ambassador. Greek journalist Antonis “Tony” Bosnakudis, political analyst and military expert, has commented on the activity of Geoffrey Pyatt in that region of the country.

According to the journalist, since the summer of 2017, when Geoffrey Pyatt first went to Alexandroupolis, everyone who's closely followed his activities has been able to draw certain conclusions:

“The first conclusion is that the US ambassador took a series of actions against Greek-Russian cooperation. There were flagrant and unfounded accusations against the then-Mayor and President of the Evros Chamber of Commerce over cooperation with Russian organisations, which shocked everyone because they completely went beyond the role that the ambassador of a foreign state could play”, Bosnakudis added.

At the same time, the analyst explains what in his opinion is behind the work on lifting the dredge barge Olga, which sank in 2010 and prevented the port from being used at full capacity. The cost of lifting works amounted to 2.3 million euros, and were fully paid by the United States under the personal control of Pyatt.

“The story of the lifting of the ship 'Queen Olga' at first puzzled many who wondered: 'Why is there so much fanfare?' Later it became clear that removing the sunken barge would allow large American vessels to access the port since space would be freed up in its waterway. So, basically, the port is intended for use by the US armed forces. Besides this, one should not forget that such a 'gesture' also has symbolic meaning for the Americans, since Geoffrey Pyatt is still 'playing' with Russian symbols. The lifted vessel bears the name of the former Queen Olga of Greece, who was of Russian origin and at one time did a lot for Greece. Thus, Americans are indirectly attacking something Russian”, Antonis Bosnakudis said.

“That is, the presence of Geoffrey Pyatt in Alexandroupolis and his actions are aimed primarily at neutralising what has been achieved by Greek-Russian cooperation in recent years, freeing everything that was planned. From the standpoint of America’s dominance, this is the message: 'We are here, you can’t do anything, accept it'".

According to Bosnakudis, the new rules of the game in the region are due to the interests lobbied by Geoffrey Pyatt and do not really benefit the region. The one thing they've managed to do, according to the journalist, is to neutralise existing Greek-Russian cooperation.

For example, at the end of summer, when there was a serious problem with the ferry service between the ports in Alexandroupolis and Samothrace, it turned out that there was a proposal to use Russian amphibious aircraft for transport links with this island and other destinations. However, it was frozen due to the anti-Russian policy conducted by the American diplomat in Alexandroupolis.

“The extension of his appointment as US ambassador to Greece, even though his term has already expired, is recognition of his excellent work done in the interests of the United States”, Kostas Isihos summed up.