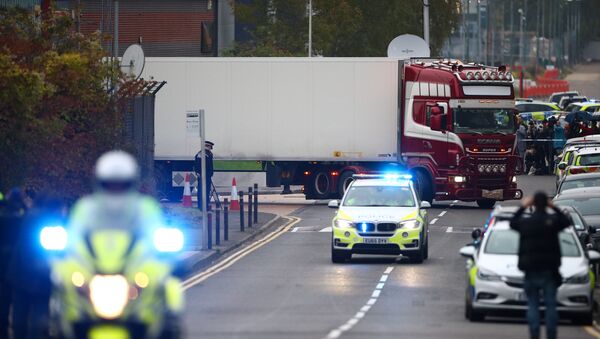 Earlier, UK Prime Minister Boris Johnson promised to bring those responsible for the deaths of 39 migrants to justice.

A Northern Irish man has been charged with multiple counts of manslaughter over the discovery of 39 bodies in a refrigerated truck in Essex last week, Irish RTE broadcaster has said.

According to the channel, 23-year-old Eamon Harrison attended a court hearing in Dublin to face 41 charges.

Earlier in the day, the British police, investigating the deaths of 39 people in a truck, asked two Irish brothers to hand themselves in.

Detective Chief Inspector Daniel Stoten said Ronan Hughes, 40, and his brother Christopher, 39, are wanted on suspicion of manslaughter and human trafficking over the deaths of the 39 people discovered in the container at an industrial park in Grays.

"Ronan and Christopher, hand yourselves into the Police Service of Northern Ireland," he said.

Amid the ongoing investigation, the police have announced that at least four of the 39 migrants were Vietnamese citizens while others had arrived from China. Vietnam has arrested two people in connection with the lorry incident in the UK, a statement by the authorities said. According to information on the website of Ha Tinh regional police, an investigation into suspected human trafficking was launched after 10 Vietnamese families had reported their relatives missing.

At least four people have been arrested in the UK and one man detained in Ireland as part of the investigation into the deaths of migrants in a refrigerated container.

Commenting on the incident earlier this week, UK Prime Minister Boris Johnson said that "the world was shocked by this tragedy" and promised to bring those responsible to justice.